The ads could lead to a cybersquatting dispute.

Elliot Silver wrote about a recent UDRP decision for ter.com. The domain name owner won the case, but the decision was closer than it needed to be.

The Complainant was the French national railway company that runs a service called TER (Transport Express Régional). The domain name resolved to a page with links related to the Complainant and other train transport.

The links likely triggered this case and made it closer than it needed to be.

In most cases, it’s fine to own a three or four letter domain that matches the initialism or acronym of a brand. But you need to be careful how you use it.  Parking one of these domains is asking for trouble. Remember that a parking page might show you innocuous ads but show different ads in another geography.

I don’t see much upside to showing ads on one of these domains, but there is a clear downside. Even if you win a UDRP, a company that sees competitors’ ads on a parked page is more likely to file a UDRP, putting you through the expense of defending it. 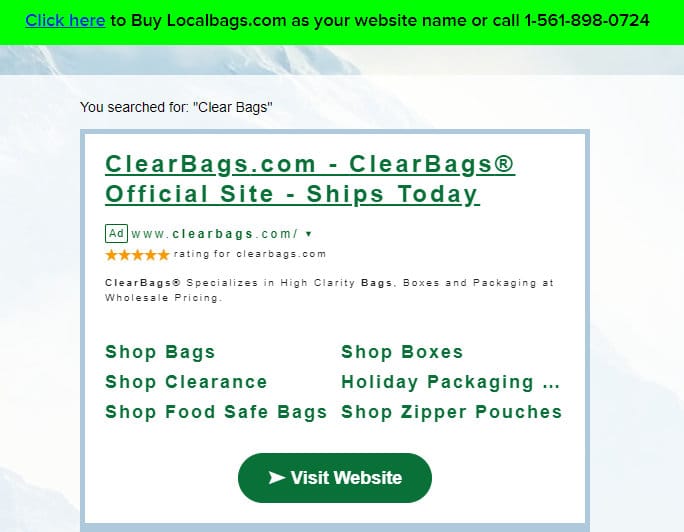 Ads on a Uniregistry parked page.

How do you optimize revenue for a parked domain name lander?

Less is more, according to GoDaddy.

After acquiring Uniregistry, the company tested Uniregistry landers to optimize revenue performance. It was able to increase revenue by showing fewer ad topics and fewer ads.

Typical domain parking landers require two clicks to visit an advertiser’s website. The first click is on an ad topic. This delivers a second page that has the ads related to the ad topic.

Uniregistry found that overall revenue increased if it decreased the number of ad categories from 10 to 6 and the number of ads on the second page from 12 to 3. (Mobile landers are still showing more ads than desktop, but this might be a test.)

The company attributes some of the lift to showing only the highest paying ads. But I’d also argue this is part of the Paradox of Choice.

GoDaddy also expanded the clickable area of ads and experimented with colors and the call-to-action.

Pay-per-click not immune to downturn.

I’ve written it many times, but now we’re starting to see the affects: pay-per-click is hurting.

I’m not talking about just domain name parking income. We’ve known for a while that payouts to domain owners have been in the dumps. I’m talking about how pay-per-click isn’t immune to downturns.

Many people argue that advertisers will move to pay-per-click during a downturn because it is more results oriented than TV advertising. The theory makes sense, but you’re assuming advertisers are rational. When a big company slashes advertising 10%, its looks everywhere for cuts. Those TV ads it contracted for 6 months ago? It can’t cancel those without penalty.

Pay-per-click ads, on the other hand, can be stopped with the click of a button. Literally.

And if advertisers haven’t learned that PPC is more results oriented by now, don’t expect these advertisers to suddenly see the light.

We’re also seeing slackening on the demand side of pay-per-click ads. If fewer people are going to buy flat screen televisions this Christmas, then fewer people are doing research on Google and thus fewer people are clicking on these ads. (Conversely, there are a lot of people searching for “stop foreclosure” right now.)

That’s not to say pay-per-click revenue will decline. It’s just that growth rates will be slashed. Even affiliate marketing for certain categories will be hurt. If you market expensive electronics or cars as an affiliate, the demand for your services is reduced.

Don’t get me wrong — I’m bullish on the future of online advertising, in particular PPC and affiliate marketing. But let’s not be naive, either.

Yahoo will stop allowing arbitrage as of this Friday, will affect other major companies as well.

In a major move sure to have ramifications across the online advertising industry, Yahoo (YHOO) has told its advertising partners that it will no longer accept “arbitraged” traffic as of this Friday. Here’s a look at what this means for domainers and even the revenue of big online advertising companies.

Arbitrage Explained
Click arbitrage involves buying an ad click at a low price and the traffic to a page of ads with high-priced ads. For example, you may bid 5 cents for a click at Google and earn 25 cents per visitor clicking on your ads.

Who does (did) it?
Everyone from individual domainers to big companies such as Marchex (MCHX) and NameMedia. Individuals did it through parking companies such as Parked.com and HitFarm (sometimes using sneaky tricks on the latter). (Other parking companies, such as Sedo, expressly forbade arbitrage.) I’ve heard stories about people quitting their jobs because they were making so much money with arbitrage. Generally speaking, this arbitrage has been from traffic at Google and Microsoft sent to Yahoo ads.

Who will be hurt by Yahoo’s change
A lot of people, and some aren’t immediately obvious.

Let’s start with the obvious. People who have used Parked and Hitfarm to create arbitrage revenue will be hit hard. It’s hard to estimate how many people this is, but it’s substantial. Word on the street is that this rule may also apply to people using the Yahoo Publisher Network for ads.

Big companies will also take a hit. When Google (GOOG) changed its algorithms in an effort to decrease arbitrage, a number of big players took a hit. This time around it will be worse. After doing some sample searches today and talking to people in the industry, I think this may put NameMedia’s IPO on ice for now. Marchex also appears to be heavy in the arbitrage game and will feel the pinch. [Updated 2-13-08: I’ve heard now from two places that big companies like Marchex will still be able to do arbitrage. I’m looking into this.]

Don’t fall into any of those categories? This will still affect you if you are a Google shareholder, if you park domains on a Google feed, or if you have Google Adsense ads on your site…

Much of the arbitrage has been between ads on Google sent to landing pages with Yahoo ads. Although Google has eliminated some of the arbitrage, test searches today show a number of arbitrage sites showing up for most keywords. This has propped up click prices, which may tumble as a result. This will be especially prevalent on Adsense sites, since Google doesn’t filter out arbitrage ads as much on Adsense sites compared to its search results.

This could cause Google’s earnings to drop next quarter. Some sources suggest that Yahoo earns as much as $200 million a year in arbitraged traffic.

Who wins?
The first winner is legitimate advertisers on Google’s network that have fewer advertisers to compete against. (Of course, Google could just change its black box algorithm to increase minimum bid prices.)

Yahoo is making this move with the long term goal of boosting click prices on its own network because it believes click quality will be better. I don’t necessarily believe this, and I don’t think Yahoo’s advertisers really know what’s going on. I think arbitraged traffic might covert just as well as regular traffic.

The irony is that, by taking a short term hit to its own earnings, Yahoo has made a competive play against Google. But why now? Why when Yahoo is facing buyout offer(s)? Perhaps this decision wasn’t made with consideration to the buyout. Or maybe Yahoo thinks other sources of revenue will more than cover the arbitraged traffic.

Stay tuned, and remember that all is not well in the domain industry.