A National Arbitration Forum panelist has ruled that the owner of Oogle.com can keep his domain name despite Google’s claims that the registration of the domain name amounts to cybersquatting.

The first issue of contention between the parties was when the current owner registered the domain name. Google claimed it was 2004; the registrant said 1999. As it turns out, Christopher Neuman registered the domain in 1999 but changed the whois record to his new company name in 2004. (The oldest record to verify this dates to 2002.)

1999 was obviously a lot closer to Google’s birth than 2004, although Google was still known at the time.

That leads to the bigger issue: why Neuman registered the domain name in the first place. Was it to trade on Google’s growing brand?

In a sworn declaration, Neuman said that he registered the domain name because of his association with a programmer who went by the handle “oogle”.

Now, the truth is that the panelist didn’t really buy that. But he also realized there are limits to the UDRP:

Despite the Panel’s extreme suspicions about this explanation, the Policy and the Rules do not provide the Panel with any authority to ascertain the Respondent’s credibility given the limitations on filings, the absence of discovery and the procedural efficiencies that are a part of (although admittedly occasionally detrimental to) this process.

Panelist Douglas Isenberg even suggested that Google might be successful in a legal proceeding that “allows for more evidentiary development”.

So the end result (pdf) is Neuman can keep the domain for now. But don’t be surprised if Google goes after the domain name through a different means.

Neuman’s company was represented by domain name attorney Zac Muscovitch. This is the third time Muscovitch has beaten Google. Previous victories were over Groovle.com and Goggle.com.

Complaint filed against domain that sends traffic to survey and adult sites.

A complaint has been filed with National Arbitration Forum over the high traffic domain name oogle.com.

National Arbitration Forum does not disclose the name of complainants until a case is decided, but you can bet good money that Google filed the dispute.

A poster on domain forum DNForum in April claimed that the site received 450,000+ unique visitors a month, undoubtedly from people who forget to type the ‘g’ in front of Google. The person was trying to sell the domain for $300,000 or lease it for $5,000 per month.

If you type in the domain name, odds are it will forward to a “survey” site claiming that you can complete a survey and get an Apple product. The logo font on the page doesn’t mimic Google, but notice the colors of the present next to the title. 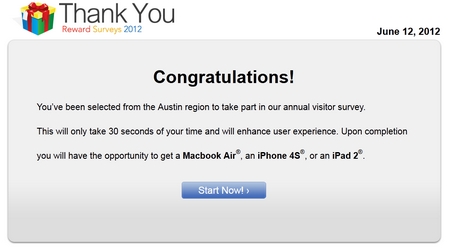 According to this YouTube video, the domain has forwarded to the survey site since at least last year. However, the post on DNForum suggests it might forward to adult content. Indeed, Screenshots.com shows a NSFW landing page for Ashley Madison on March 25, 2012. So the owner of the domain is splitting the traffic.