First, at 7:55 am PDT, I’ll join Soeren von Varchmin for the opening session, where I’ll talk a bit about the current domain name market.

Then at 10:05 am PDT, I’m leading a discussion with Logan Flatt and Mark Levine. This is your opportunity to hear from two domain investors who will divulge their full profit and loss statements. Not just tweets about making big money from individual domain sales — you’ll learn how much they’ve invested, their full costs, and how it nets out. We’ll also discuss which types of domains they are making money from (not just .com!), how they are pricing them and more.

Tickets are still available for $99.

NamesCon.online will have an auction for everyone next week.

Next week’s NamesCon.online event will feature three auctions, and pre-bidding is now open for the big RightOfTheDot Auction.

On Wednesday, September 22, get ready for the RapidFire live domain auction. Born on Clubhouse, this auction will feature names with no or low reserves.

The next day, Monte Cahn and RightOfTheDot will hold an auction. It will be conducted live from a studio with auctioneer Wayne Wheat and include 75-100 names. The company will follow up with an online auction for domains that didn’t meet reserves and other domains not included in the live auction. Pre-bidding is currently open for the auction.

Then on Friday, there will be an auction of Handshake domain names. This follows three days of programming in a Handshake track so people can learn more about these blockchain domains.

You can learn more about these auctions and what else to expect at the event in my interview with Soeren von Varchmin last week. 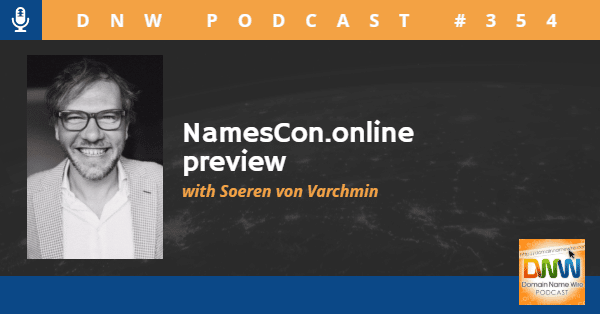 NamesCon.online kicks off next week, so I asked Soeren von Varchmin to visit with us this week for a preview. He explains the three (yes, three) auctions taking place and previews some of the sessions. Plus, we give away three free passes to the event.

It’s been a tough couple of years for live event organizers due to the coronavirus.

The last in-person NamesCon event was in January 2020. Some people canceled at the last minute due to the burgeoning virus; there were several cancellations from China. But the mood was generally upbeat with the hope that the virus would soon pass like many before it. Little did we know that the world would shut down just two months later.

NamesCon shifted to an online model.

Earlier this summer, it looked like it might be able to return to a live event this coming January. But no more.

Citing the increased spread of the virus, uneven vaccine distribution, and international travel restrictions, NamesCon has decided to postpone its next in-person conference until later in 2022. At the earliest, we’ll be looking at spring. Given the lead time necessary to plan a conference, this would require substantial improvements over the next few months.

The next NamesCon Online is scheduled for next month. So at least we can get together virtually.

NamesCon is offering up to 150 first-time attendees a ticket for $19. (It previously offered these for free.) Returning attendees can get early bird tickets for $79.

The main sessions take place daily from 3 pm – 7 pm UTC, making it accessible for people worldwide to tune in.

This is the first NamesCon since GoDaddy sold the event earlier this year. You can learn more about the new ownership group in this podcast.

I suspect that organizers hope to return to in-person events in 2022, which will be predicated on widespread vaccination.