In an investor update issued today, the company said that domain registrations are up 38% year-over-year so far this year to 1.84 million registrations. Billings are up 129%. The company credits the first time contribution from ICM Registry domains as well as strong growth in China.

Donuts co-founder Dan Schindler is now a Special Advisor to the company to help it on its premium domains strategy. Schindler left Donuts a while back and recently resurfaced in the industry. Christa Taylor was also formally announced as the company’s Chief Marketing Officer. Taylor had consulted for the company starting last year and became CMO ahead of NamesCon this year.

The company plans to pay off its outstanding debt early this month.

Top level domain name company Minds + Machines (MMX) reported first half earnings today and set out expectations for the rest of the year.

The company also reported good results with .VIP. During the second anniversary of its launch, renewal rates were 76%. This is despite a bursting of the Chinese domain name bubble. 9 of the top 10 registrars for .VIP are Chinese.

I am speaking with MMX CEO Toby Hall later today and will have more commentary.

The acquisition concludes MMX’s strategic review, in which it was determining if it made sense to be acquired or to acquire other assets.

Here are some notable points about the deal:

Minds + Machines (MMX) announced today that it was profitable in 2017, the first year that it has been profitable as an operating company.

The release says that the company is continuing its strategic review:

The strategic review continues to progress and the benefits of consolidation in the industry remain. Whilst the longevity of the discussions has been at times frustrating, it is hoped that the process can be brought to a successful conclusion by the time of the full year results which are expected to be released in April 2018.

This suggests that the company might make an acquisition or be acquired by then. Or, it could do nothing. 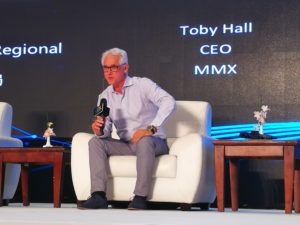 The results are a mixed bag. The company prepared the market for a drop in revenue because of a spike last year when .VIP was launched.

At the same time that topline numbers dropped, partner payments and cost of sales increased.

However, the company is achieving one of CEO Toby Hall’s key goals, which is to get renewal revenue to cover fixed OPEX “allowing new sales to increasingly drop to the bottom line.”

The company also sold over $3 million of .VIP domains subsequent to the end of half.

One of the tricks for MMX will be to increase registrations in the TLDs other than .VIP so that fluctuations in .VIP doesn’t have an outsized impact on results. The company announced contracts of $1.0 million for premium .London domains, so that might help.

The company also revealed this it pocketed $2.4 million from losing auctions for the .inc and .llc domain names.