Domain name was part of a bankruptcy auction.

Domain investor and DomainTools founder Jay Westerdal has acquired the domain names Vanity.com, Vanity.net and the Vanity.com® trademark in a Chapter 11 bankruptcy auction.

The auction was for assets of Vanity Shop of Grand Forks, Inc. and the court has approved the sale.

Westerdal bid $340,000 in a Chapter 11 telephone auction for the domain name. According to the auction transcript (pdf), a company in The Netherlands called Xenax was the initial high bidder at $330,000. After the creditor committee conferred, Westerdal chimed in saying he was on the other line and wanted to bid again at $340,000. Xenax objected but they accepted Westerdal’s bid anyway.

Vanity.com has some history. The domain was lost in a very bad UDRP decision and then the owner sued to stop the transfer. The companies later settled and the owner transferred the domain name to Vanity Shop.

Last week I visited the many domain name companies that call Seattle home. 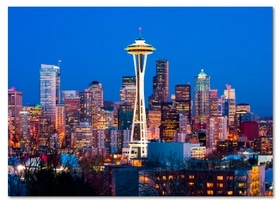 Seattle is home to a large (and growing) number of domain name companies.

Last month I took my annual family “escape the Texas heat” vacation to Seattle. I didn’t get the chance to visit any of the domain companies in the area while I was there, so last week I took a return trip to Seattle to rectify that.

The collection of domain name companies in Seattle is large and growing. This is not by coincidence. A couple domain name entrepreneurs in the area have had nice exits and started other domain ventures for a second act.

Other companies, such as GoDaddy, have moved to the area to take advantage of strong tech talent.

Soon you’ll be able to add even more Seattle companies to the domain name list. Perhaps Amazon.com, which applied for 76 top level domain names, will be considered a domain name company.

While my company visits were mostly for information gathering and introductions, here’s a quick run down of the visits.

My first stop was to visit Archeo on Pike Street. Archeo is the pure-play domain name company being spun off from Marchex. Later this year or early next year it will become its own publicly traded company.

Archeo has over 200,000 domain names, and earlier this week formally launched its domain marketplace.

Archeo excites me. Its domain portfolio has a lot of low-hanging fruit because it hasn’t been touched for years, which means we’ll see a lot of action in its portfolio over the next 6-12 months.

The company is also starting to acquire domain names again, which may present opportunities for domain name owners with solid portfolios or individual domain names. The company will obviously be smart about acquisitions, but there’s one more large buyer in the marketplace now.

Just down the street from Archeo is DomainTools, the domain name data company.

DomainTools’ office has an open, startup feel to it. All employees – including CEO Tim Chen – work out in the open. Meetings are held in rooms named after top level domain, e.g. the .org room. (Perhaps it will rename some of them after the launch of new TLDs.)

The company is working on some neat initiatives that I expect we’ll learn more about in the coming year.

Next up I visited with Jay Westerdal, who founded DomainTools and sold it in 2008.

Although laying a bit low, Westerdal isn’t out of the domain business. He is involved with 11 top level domain name applications, a couple of which are uncontested.

The next day I drove out to visit with Donuts. Donuts is the largest applicant for new top level domain names. It originally applied for 307 domains but has since withdrawn some after settling contention sets.

The team at Donuts has basically every aspect of the domain name industry covered experience-wise. It’s also backed by $100 million + in financing and The Wall Street Journal named it the #14 top startup.

In other words: it’s kind of a big deal.

If there’s any disappointment to visiting the Donuts office, its that there’s no Krispy Kreme franchise located in the breakroom. That’s probably for the better; I suspect the company’s health insurer would jack up its rates if there were.

Seattle is home to much of Demand Media’s domain name operations, which will soon be spun off into its own publicly traded business.

While there I also picked up one of the popular .ninja mousepads. Someday these mousepads will sell for a lot on eBay.

My final stop was GoDaddy. GoDaddy’s quest for talent has stretched from Phoenix to Iowa to Silicon Valley and now to Seattle. Its new office in Kirkland is literally walking distance from Demand Media, which means quite a few domain people are bumping into each other while taking caffeine breaks at the same Starbucks.

The office is on Lake Washington. How’s this for a perk: work at GoDaddy’s Seattle office and you can literally drive your boat to work and dock it outside the office. That sure lends a new definition to “morning commute”.

The parties participated in a second mediation session with Hon. George P. Schiavelli (Ret.) on March 10, during which both parties came to a settlement. Terms of the settlement are confidential.

A court document notifying the court that a settlement was reached reads:

The Parties are currently in the process of finalizing payment and performance under the settlement agreement. Once payment is completed in the near future, the Parties will take the steps necessary to cause the Second Amended Complaint and the First Amended Counterclaims to be dismissed with prejudice.

Although it’s not a surprise that a settlement was reached, the dispute lead to a lot of previously confidential information about the acquisition becoming public — including the $16 million plus equity purchase price.

Parties file amended claims, with most allegations against TCI dropped.

Following a mediation between Jay Westerdal and Thought Convergence over the latter’s acquisition of Name Intelligence, both parties have submitted amended complaints/counterclaims.

The most notable difference in the amended filings is that Jay Westerdal has dropped most of the allegations he made against Thought Convergence (TCI) in his counterclaims. Gone are claims that TCI didn’t pay his salary, that TCI misrepresented the condition of its business, and that it participated in the “banned industry practice of arbitrage”, among other claims.

Instead, Westerdal’s brief amended counterclaim (pdf) basically alleges TCI failed to pay on time and didn’t properly set up an Equity Incentive Plan prior to execution of the acquisition agreement.

TCI’s second amended complaint (pdf) is similar in nature to its first amended complaint. It includes more detail on some of its initial allegations against Westerdal. For example, to back up its claim that Westerdal “used company assets as his own personal bank account, loaning himself money and giving himself raises without authorization”, TCI alleges that Westerdal said that this was to “bolster his application for a bank loan to purchase his primary residence”.

A second mediation date is scheduled for January 27.

TCI and Westerdal getting closer to resolution.

A settlement between Thought Convergence and Jay Westerdal over the former’s acquisition of DomainTools’ parent Name Intelligence is closer to reality, court records show. As a result, both parties have requested a postponement (pdf) of deadlines and the trial date.

The parties held a mediation session with the Hon. George P. Schiavelli (Ret) on January 6, of which Schiavelli wrote (pdf):

“…during the mediation, I found The Parties’ counsel to be exceptionally realistic concerning the strengths and weaknesses of the case and able to work well to seek resolution.”

Schiavelli noted that amended pleadings with narrower claims will be filed this week. He believes a brief discovery is necessary to reach a potential settlement:

“Though the case did not settle, I believe the Parties made substantial progress identifying the issues and obstacles to settlement and seeking solutions to them. I agree with the parties that further discrete discovery is needed on key issues before a further attempt to reach resolution would be practical.”

In his sworn statement to the court, Schiavelli notes that a settlement is a “realistic possibility”.

A second mediation date is set for Jan 27. If the court grants the extension and a settlement isn’t reached, the new court date will be May 11, 2010.