Something weird happened when I updated our iPads to iOS 9.1. I’m not sure if it is an intentional change or a bug.

Here’s the deal: When you press and hold the period “.” key on the iOS keyboard on an iPad, it no longer automatically inserts .com. Oddly, this behavior is different on the iPhone.

For a long time, if you pressed and held the period key for a second in a field that might contain a domain, iOS would pop up a selection of five top level domain names. It would auto select .com, so if you let go a .com would be inserted. END_OF_DOCUMENT_TOKEN_TO_BE_REPLACED

Late last month Apple filed a cybersquatting complaint over the domain name iPad3.com. Shortly after filing the complaint the owner of the domain acquiesced, giving the domain to Apple’s lawyers Kilpatrick Townsend & Stockton.

For a while after the transfer to Apple’s lawyers the domain didn’t resolve at all. Now it forwards to the iPad page on Apple. Here’s the full URL I’m forwarded to when I enter the web address:

Notice the tracking code after the question mark? That means Apple is tracking the traffic it gets from this domain. It also means the company can determine what visitors who type in iPad3.com ultimately do at the site. Do they buy an iPad?

My thoughts after a couple days with the iPad. 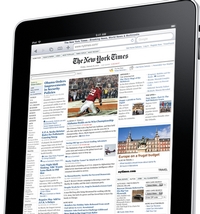 My wife bought an iPad for me for Father’s Day. She can’t keep a secret so she gave it to me as soon as it arrived in the mail. I’ve had a couple days to play with it, which has given me time to reflect on what apps might do to domain names.

So far I’m going to agree with Jason Fry. Basically, the apps that correspond to web sites are subpar at best, and the actual web sites suffice. Score one for navigating by domain names.

That’s not to say that companies won’t try to move traffic from their web sites to paid apps. When I visit Cardinals.com to get a score update, I can’t view the score. Instead I see a message asking me to download MLB’s $15 iPad app. This sort of bastardization of the web, courtesy of Apple’s own ideas of what makes the web good (e.g. no Flash), does not result in a good user experience. Nonetheless, if I want to see how the Cardinals are doing, I either need to go to ESPN.com or buy MLB’s app.

But most apps are from big web sites. That just means less traffic for typosquatters since users will directly navigate to the content via an app instead of (mis)typing the domain names.

The iPad isn’t a Kindle killer, either. The iPad is a poor choice for an eBook reader if you read full length books. Compared to the Kindle it’s much heavier and bigger, strains your eyes, and can’t be read in sunlight. If people use these to read books we’re going to have a whole generation of people with long term wrist injuries. That said, the iPad presents a much better experience for reading news, which could cut into Kindle’s revenue for periodical subscriptions.

Is the iPad changing how we consume web content?

In January I wrote a post about the iPad and how it could be bad for domainers. Devices such as the iPad seek to replace traditional web browsing with apps, thereby rendering the URL useless for accessing content.

Domain Name Wire reader Gavin sent over an interesting view from Jason Fry writing for Nieman Journalism Lab. After using the iPad for a couple weeks, Fry says that web browsing still rules on the iPad; it offers a better experience than apps:

After about a week of using the iPad, I started deleting apps, because the websites themselves were perfectly adequate. This is the reverse experience of the iPhone. On the iPhone, the browser was used only in emergencies, and apps ruled. On the iPad, at least for now, the opposite is true â€” the browser is superb, and renders many apps superfluous.

Granted, Fry’s reliance on the browser has a lot to do with the early state of most iPad apps. Over time app creators will figure it out, potentially making apps better than web browsing. But it begs the question: if I have a nice, 10″ screen for web browsing, why would I need an individual app for each news site?

iPad-friendly sites are a reminder of mobile-friendly web sites.

In January I wrote about how the iPad could be bad for domainers because it will change the way some people navigate the web. Today news of a different sort regarding the iPad and web sites has surfaced: NPR and The Wall Street Journal will show different versions of their web sites to iPad users.

At issue here is the iPad’s lack of support for flash, which both NPR and WSJ apparently use heavily on their sites.

When mobile web browsing picked up, the web split in two as sites were made for mobile or desktop browsing. Hence the idea of .mobi, a top level domain name that would only contain web content optimized for small screens. Web enthusiasts screamed that the idea fragments the web, and instead the focus should be on creating web sites that work well on both small and large screens.

Many years later its apparent that .mobi wasn’t needed because of device and browser recognition. If I visit an optimized site with my phone, it will serve up a mobile version of the site. I don’t need .mobi.

That’s the approach NPR and WSJ are taking. Do we need a .ipad domain? Of course not. Web sites can just serve a different page to someone visiting from an iPad.

It’s still not ideal — web designers shouldn’t need to optimize for several devices. And ‘app’ on the iPad will be like creating new web site for a different platform. Yet the hindsight of what happened with .mobi and the mobile web helps us see the path forward.