Kassey Lee examines how these IDNs have performed since the beginning of last year.

I wrote about the Chinese IDN extensions in January 2020. Now, about one and half years later, it’s time to check-in and see how they’re faring.

I used Namestat.org to find the number of domain registrations for each of the Top 10 Chinese IDN extensions as of June 2021:

For the 2020 figures, I copied them from my last article mentioned earlier. Here’s the list.

Look at the best extension .网址 (web address). It peaked at 380,000 domains in 2015. Since then, it’s been on a downward trend. Compared with last year’s figure, it has dropped a whopping 42%. Registration numbers for each of the remaining 9 extensions are tiny at fewer than 30,000 domains, and many have gone backward.

IDNs haven’t been as successful as backers hoped.

One of the purported benefits of expanding top level domain options last decade was to offers domains in native scripts and languages to their users, so-called Internationalized Domain Names (IDNs). Let’s look at an IDN ccTLD (not a “new” top level domain) as an example of interest in IDN TLDs.

The birth year of .中国cannot be pinpointed precisely. In 2000, the Chinese Domain Name Consortium (CDNC) was formed to promote Chinese character-based domains. Registration of .中国 domains probably started in this same year, as evident in the registration dates of domains such as 阿里巴巴.中国 (Alibaba.china IDN) and 亚马逊.中国 (Amazon.china IDN). Technical details were worked on and improved in subsequent years while such domains could be registered within China. In 2010, .中国 was officially approved by ICANN and added to the Domain Name System for global use.

Below is a chart of the total domains under management of the extension based on data compiled from China Internet Network Information Center (CNNIC) reports. 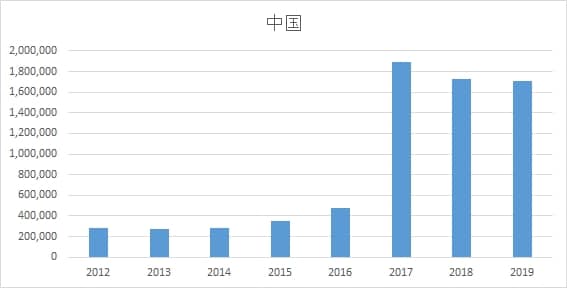 The chart shows a severalfold increase in 2017 but the cause is unknown. I could not find this same pattern in .cn or .com during the same period. Because investors are a major force in the domain market, sometimes you can see big movements caused by investor sentiment.

After the extension peaked in 2017, it started to fall gradually despite efforts of the Internet Society of China to promote it.

Compare .cn with .中国, both of which have 20 years+ histories. The former had 19 million registrations last year, but the latter only 1.7 million. Also, .cn has 100 million pages reported by Baidu. .中国 has 0 pages using the “site:.中国” search parameter. (Google is better, indicating 323,000 pages of .中国 websites.).

It appears that corporate China does not care about the .中国 extension.

Note the accent mark in this domain name.

A domain industry friend was in Austin this morning and we met up for breakfast. When scheduling a place to meet, I googled the name of a local bakery to get its details. I did a double take when I saw its domain name:

Notice the accent mark above café?

This is technically the internationalized domain name xn--sanfranciscobakeryandcaf-yfc.com

I was surprised to see a restaurant adopt an IDN. I wonder if they copied-and-pasted their name into the registrar search box when they chose the domain. (I tried to talk to the owner this morning but he was too busy making pastries.)

I doubt this restaurant has many people typing in its domain name. If they did, few people would land on the website because most wouldn’t include the accent. To be honest, it seems that domains are an afterthought for this business. A shorter domain printed on the bakery’s menu has expired and, when you search on Google, a Weebly subdomain site also pops up.

Clearly, this restaurant isn’t too worried about its web presence. It’s been around for a while and counts on repeat business.

Still, I thought it was interesting to see a U.S. restaurant using an IDN.

A defense of .com’s staying power and bad news for IDN.com investors.

On its investor conference call yesterday afternoon, Verisign CEO James Bidzos explained why he isn’t afraid of new top level domain names. Also, in a blow to IDN.com investors, the company said it will take a longer for them to hit the market than many are hoping for.

New TLDs? We’re not afraid of those!

Despite Verisign’s never-ending tactics to delay new top level domain names, Bidzos told an analyst that he’s not really worried about how new TLDs will affect the .com base and he explained how .com will remain king. Here’s his explanation:

So for example, you may have seen that the U.K. paper, dailymail.co.uk, a very typical English configuration for a web address, using a company dot U.K. configuration. So dailymail.co.uk purchased dailymail.com. They said that they purchased it because they wanted something that was more global that would allow them to get more traffic, especially in the U.S. They paid GBP 1 million for it. They bought it from The Charleston Daily Mail of Charleston, West Virginia, a 100-year-old Pulitzer Prize winning newspaper, who after they got their roughly $1.6 million for that domain name, were free to go out and buy whatever they wanted. Then they chose to go out and buy charlestondailymail.com. If they bought it for retail, they probably paid about $10 for it. So I think .com is very much the preferred, established reliable name. I don’t know what’s going to happen in the future with the TLDs. I’m sure some of them will do well, they’ll build some community. But I guess I can give you one data point. If we look at — look back, this is not the first time this has happened. There have been some new TLDs before, and one of them that I think actually is a good idea of what success what might look like, a good example would be .co. And I’m sure a lot of you are familiar with it. .co is a short name, it’s just 2 letters. It’s a meaningful name, it’s linked to company. They went live in July of 2010. They had a very robust marketing partner, they partnered with Go Daddy, the largest registrar. They did 3 Super Bowl ads. They did, I thought, a very good job of marketing. They did partner with Go Daddy on 3 Super Bowl commercials. They have a substantial marketing budget. They had no gTLD competition when they came out. And they’re not ICANN-regulated because they’re operating under contract from the ccTLD .co for Colombia.

So their history was that when they went live in July of 2010, they registered 100,000 domains in the first 10 minutes that they were live. Less than a year later, in June of 2011, they had reached 1 million domains. During that same period, by the way, that 11-month period, .com registered about 7 million. Just under 2 years later, by April of 2013, they had gone from 1 million to 1.5 million, so they added 500,000 domains during those 2 years. During that period, .com added 13.2 million. And then from April of 2013 until December 31 of last year, they added another 90,000 names, they closed the year at 1.59 million. .com added another 3.5 million during that time. I think they’ve done a great job with .co. I think they’ve been successful there. They ended the year at 1.59 million domains. Their growth has slowed a bit, obviously. But in Q3, we added 1.55 million names, that’s the entire size of the .co zone. We added that in one quarter. We typically have 5x the size of their zone in gross adds in a quarter. So I think with somewhere in the neighborhood of, I don’t know, 400 or 500 gTLDs that are non-brand that’ll be distributed, it’s going to be a little bit more crowded. They’re obviously more specialized and different. I’m not sure where that’s going to end up, but I do know that we have at least one data point, so I think we’ve coexisted well and done well with .co, and I’m sure we will with the other gTLDs. And I’m sure there’ll be a lot of excitement as they roll out over the course of 2014. But we — what we described as impacting our zone in the first quarter is what we see, some registrar behavior and also some economic headwinds that we’re seeing in Asia.

The last sentence refers to the fact that Verisign saw slowing zone growth in January. It is blaming this on international markets as well as registrars not pushing discounted .com domains as much and instead focusing on pushing bundles.

But perhaps the fact that registrars are pushing new TLDs instead of .com is also hurting .com?

True, most registrars still serve up .com number one, but GoDaddy’s home page is pushing customers to new TLDs, not .com.

Sorry IDN investors, you’re going to have to wait.

I have bad news for those IDN investors patiently waiting for .com transliterations. You’re collateral damage.

Here’s the deal. Verisign has been invited to contracting for 12 of 14 names. Pat Kane, SVP of Naming and Directory Services, said it’s going to take a while to get through the negotiating process.

Part of this is because it’s trying to do something novel by offering domains to the existing .com owner. But it also has to do with name collisions, which is one of the FUD topics Verisign is using to try to slow new TLDs.

Given Verisign’s testy relations with ICANN right now, its efforts to delay new TLDs overall (despite apparently not being worried about them) and its additional asks for the contract, I suspect it’s going to be quite some time before the IDN transliterations see the light of day.

One final note from the conference call. James Bidzos said the company continues to work on its plan to monetize intellectual property. But his timeline and update is the same it has always has been: we’re progressing, he’s not going to say how soon it will happen (other than not right now) and the plan is still under wraps.

Depending on your language, new TLDs might be about new opportunities to the left of the dot.

When ICANN unveiled the list of top level domain name applications at a media event in London last summer, some in the community were upset that Arabic IDNs were presented left to right instead of right to left.

Some scripts, including Arabic and Hebrew, are read from right to left.

This really hit home for me a couple weeks ago when I was writing about the registry agreement for شبكة. Whenever I paste that into WordPress, the cursor jumps to the left of the word instead of the right.

So how does this work in practice? If a language is to be read from right to left, is the top level domain not “right of the dot”?

I reached out to a couple companies to learn more about this.

As it turns out, most major browsers have localized versions. These versions handle the scripts, accounting for reading right to left.

Here’s an example for the already delegated country code domain امارات. or .emarat. This is from the aeDA’s (.ae Domain Administration) web site:

The second level domain is to the far right, followed to the left by dot, then the top level domain, and / directory page URL.

If you imagine Domain Name Wire in Arabic, this page: