Now we know why.

VentureBeat reports that the company is testing a payments solution to competed with Square and PayPal. Apparently the company is offering an iPod Touch with the card reader to merchants free of charge, and the service is priced very competitively compared to competitors.

The author of the VentureBeat article says an email from Groupon hints at a forthcoming point of sale system for iPod and iPad. Given the domain names the company registered, this appears to be on the product roadmap.

Here’s the whois record for GrouponPOS.com. The other domains have similar records. 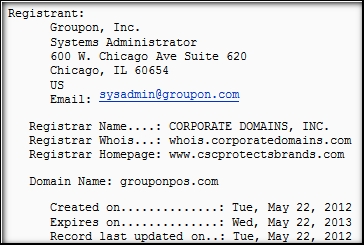 Over the past several days Groupon has registered over a half dozen domain names for “Groupon Goods”, including GrouponGoods.com, GrouponGoods.fr (France), and GrouponGoods.org.

I can’t find any announcements from Groupon about a new “brand” of Groupon Goods, so we’re left to speculate what the company is up to.

1. “Goods” as in merchandise. Most of Groupon’s offers are for services or food. Groupon Goods could be a special offering for merchandise only. I know I’d rather subscribe to that than get bombarded with offers for Brazilian Blowouts.

Perhaps LivingSocial is following the same tact as Groupon, just a bit delayed. In March Groupon was awarded the domain name Groupon.ie through the same World Intellectual Property Forum process that LivingSocial is going through right now. That allowed Groupon to change is Irish URL from CityDeal.ie to Groupon.ie.

LivingSocial.ie is registered to an individual in Ireland. So far it’s just parked with a “coming soon” page.

Company’s choice of a made up word was smart.

I’ve read a lot of posts and comments on domain blogs over the past couple week about Groupon while the company was considering a buyout offer from Google.

I don’t remember what I read where, but here is an amalgamation: it isn’t worth $6 billion (which it reportedly turned down), its technology is basic and easy to replicate, there’s little barrier to entry, and the name sucks compared to a good generic one.

I agree with some of this. It’s true the technology isn’t anything special. And there’s little barrier to entry. But you know what? This company is executing. It’s generating lots of cash. The one that I laugh at the most is the suggestion that, because it’s technology is nothing special, it’s not worth much. Some great businesses have basic technology.

But here’s the take-a-way I think is most important: Groupon.com was a better name choice than Coupon.com.

What??? Isn’t that heresy in domain investor circles to suggest that a “made up” name is better than a generic?

Perhaps. But by choosing the catchy (and meaningful) domain, Groupon:

1. Paid a lot less for a name than it otherwise may have. Now, the company still screwed up by launching without buying the Groupon.com domain name. It ended up paying six figures to buy it. But still, compare that to the outlay for something like Coupon.com or Deals.com.

2. Has a defensible brand name. If the company had been called Coupon.com (and there is such a site), it wouldn’t have any legal right to domains such as Coupons.com, eCoupon.com, iCoupon.com, NYCCoupon.com, etc. because of their generic nature. But the company does have plausible rights in anything with Groupon in it.

This is a perfect example of when launching a business on a made up domain (albeit with meaning) made much more sense than a “category killer” generic.