Domain owners can pick template for domains on self-serve system. 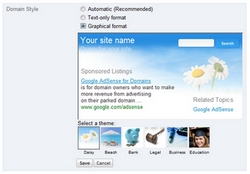 The service has been auto testing alternative templates with various pictures for many months, but users didn’t have control over which templates were selected.

There are generic templates (such as “Daisy”) and category templates such as banking, legal, education, and business.

A text-only lander is still available, and Google recommends users let the system select which version works best for their domain names.

Domain owners can also place a “for sale” notice on their domain names.

Although the customization features are certainly welcome, the number of templates and graphics still pales in comparison to what most Google Adsense for Domains partners (e.g. Sedo) offer to clients.

Two new templates being tested, including one with a graphic.

An alert reader sent me an example of a domain name using Adsense for Domains “Online” that rotates between three different landers. In addition to the standard lander we’re all accustomed to, there’s a more basic one and one with a tropical theme: 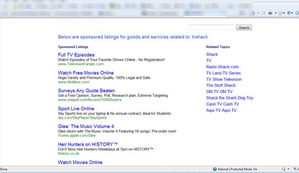 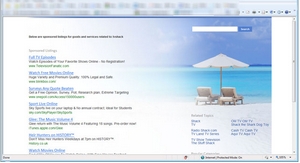 Update: another Adsense for Domains user sent me an example showing up on some of his financial domains: 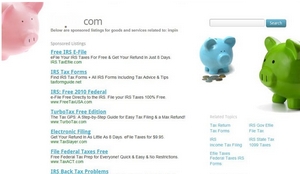 I keep a few domain names on the self-service platform and am unable to see a way to test alternative templates within my account.

The rotating example I have is for an .es domain name, and it’s possible Google is testing this on non-U.S. accounts.

Google Adsense for Domains “Online” is a self-service product that is completely separate from services such as DomainSponsor and Sedo that use Google’s ad feed. Those companies provide their own templates and optimization.

Ever since Google released its direct-to-publisher Google Adsense for Domains program, one of the big complaints has been how difficult it is to point your domains to Google’s parking servers. You had to make a change to your A records and create CNAME records. Compare this to the typical parking service that lets you just change your name servers or forward the domain.

Google has responded to the feedback. Now you can just point your domains to ns1.googleghs.com to park them. (Google picked up the Googleghs.com domain name back in October.)

Note that this change has no affect on Google’s direct domain parking partners, such as Sedo and DomainSponsor.

Google Adsense for Domains “online”, the self-serve domain monetization offering for individual domain name owners, is expanding its use of keyword hints.

Keyword hints are keyword suggestions provided by domain owners when they submit their domain names to Google Adsense.

As Google explains it:

These keywords are suggestions supplied to Google by domain owners about the types of content users are looking for when they arrive on an undeveloped domain. They are used to help our system determine the best ads to place on these domains. For example, with the domain www.rockstarsand.com, a publisher might suggest the keywords “bitumen” and “mining” so that ads may appear from advertisers offering oil extraction products.

Presumably keyword hints were used less often in the past, or not given as much weight.

It was three months ago that Google (NASDAQ: GOOG) dropped a bombshell: it would start offering domain parking services directly to Adsense clients.

Now that a few months have passed, I’ve had more time to reflect on this move and what it means for the industry.

The short term effect has been more of wonderment than actual impact. What are Google’s long run plans? Does it intend to cut out the middleman? We won’t know the answer for a while. But there are a few things we do know:

1. Google isn’t exiting the domain business. In the past I had publicly opined that there was a slim chance Google would exit domain monetization altogether. That’s clearly not the case. Google legitimized the channel with its announcement.

2. Google Adsense for Domains direct is an early stage product that doesn’t perform well. I’ve yet to talk to a domain owner who has been pleased with earnings or reporting with the product. The templates are all standard templates that have been offered to Google partners for a while. There’s a reason Google partners rarely use these stock template.

3. Google may not be evil, it may just be experiencing growing pains. Part of the hubbub over Google’s move was that it did not inform existing parking partners that it would be going direct until just days before the product launched.

Well, it turns out it may have just been a case of one hand not talking to the other. The group at Google that works with partners such as DomainSponsor and Sedo is completely separate from the one that launched this product. Officially, the product is called “Google Adsense for Domains Online“. I suspect the Online group was looking to expand its reach and decided to offer the service. It then told the partner group with little time to spare, which put the partner group into a tough position of telling its partners.

It’s a sign of Google getting big. You’d be amazed how many duplicate projects are run inside big companies.