How domain name registrars performed in the latest official report. 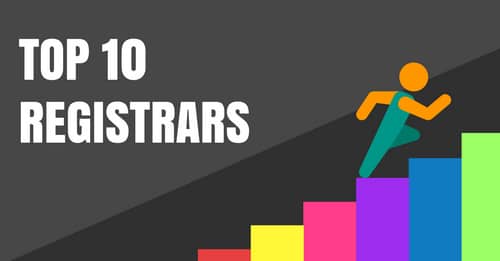 ICANN has published the latest official data from Verisign (NASDAQ: VRSN) about the .com namespace. This registrar-by-registrar report covers September 2018.

Here’s how registrars did in terms of new .com registrations.

Here’s the leaderboard of the top registrars in terms of total .com registrations as of the end of September 2018. Base on trends, I suspect Google overtook GMO in October 2018.

Many domain companies have multiple accreditations and I’ve tried to capture the largest ones. See the notes below.

* Includes GoDaddy and Wild West Domains
** Includes Tucows and Enom
+ Includes PDR, Domain.com, FastDomain and Bigrock. There are other Endurance registrars, but these are the biggest.
++ Includes Network Solutions and Register.com

Google buys typos of ccTLDs and top level domain names other than .com

Over the past few days Google has ramped up its efforts to get country code and top level domain name typos in the .com version.

For example, it has registered dozens of domains in the format:

No need for dashes, though. A common typo is to forget the dot between a second level and first level domain name. .Com is often appended. So the company has picked up domains such as googleeu.com, a typo of Google.eu.

Typo traffic to Google is immense. Google’s land grab show just how powerful .com is for all companies, regardless of the top level domain name people are trying to visit.

Google Adsense shows off its platform.

Google Adsense is not an ad network. It’s an advertising platform, and Google (NASDAQ: GOOG) is taking steps to open it up.

Adsense is taking its next step to opening up the platform by allowing other display advertising companies to place ads on Adsense Publishers’ sites.

I foresee Google becoming an ad optimization system, similar to the parking systems that used automate which parking company to send your traffic to.

So isn’t this great news? It seems so on the surface. It should mean more money and convenience for publishers in the short term. Small publishers will win the most, as they don’t have the clout or time to shop around to different display advertising networks.

In the long run, competing ad networks may become more reliant on Google. Google will provide easy ad inventory to them, which will result in ad networks taking their eye off the ball on acquiring more ad inventory. You may even see ad networks pop up that have no inventory and focus solely on getting high-paying advertisers.

Like many other internet marketers, ShoeMoney has invested lots of money into perfecting his online advertising strategy, including the keywords he bids on. But in a lawsuit reported on TechCrunch, ShoeMoney alleges a Google employee may have stolen his keyword strategy and bypassed systems to bid on the ShoeMoney trademark.

Whether or not the allegations turn out to be true, this will be a case worth watching. I’ve always wondered how this hasn’t been brought up in the past. Are Google employees allowed to bid on Adwords? Even the employees that are in the Adwords division? They could easily copy advertisers that are doing well and making money.

On one hand, you want employees to know the product. On the other, you don’t want to create a conflict. It’s kind of like an employee bidding on domain auctions at his own company. Or an affiliate marketing company copying its clients strategies to make money for the house.

I can also imagine employees that work on the search algorithms selling secrets to internet marketers. Or perhaps leaving Google to start a search engine optimization firm. Who wouldn’t hire an SEO who’s last job was at Google? Heck, a current Google employee could create his or her own web site and use inside knowledge to get better search rankings and Adsense revenue.

I’m not sure how this will turn out, but I doubt this is the last shoe to fall.

Google’s black box of ad pricing makes it impossible to understand if partners are getting a fair share.

When Google (NASDAQ: GOOG) offered a “direct to consumer” domain parking option last month, many cheered. “Finally, we can cut out the middleman!” they exclaimed. But others worried about potential downsides. Specifically, domain owners realized that they have little bargaining power with Google compared to parking companies that aggregate significant traffic.

To better understand how Google can squeeze its partners, it’s important to understand the deals Google has in place with partners such as DomainSponsor, NameMedia, and Sedo.

These contracts are confidential. But thanks to NameMedia’s (since aborted) attempt to go public, we can peek inside a Google Adsense contract. Here are some things to note:

1. There are three types of feeds: Adsense for Content, Adsense for Domains, and Adsense for Search. Adsense for Search is the search feed from Google. This ad feed can be called anytime someone types a search query into a box on a parked page. It is also called if someone clicks on a link on a parked page labeled “Related Searches”. I’m still unclear as to the difference in ads shown on Content and Domains, but these ads can be shown on the landing page of a parked page or on additional pages. If you have a one-click lander with Google, all of the ads on the home page are from the content or domains feed.

2. Parking companies get a higher revenue share if they send more traffic. The NameMedia agreement has three tiers, which presumably pays a higher percentage of revenue to NameMedia if it sends a greater amount of revenue to Google. (Note that it is based on revenue amount, not traffic amount.)

You may be thinking “Great! The parking companies have negotiated certain revenue share percentages with Google that cannot be changed. We’re locked in.” Well, sort of.

First, this is one of the main concerns with going direct to Google parking and cutting out the middleman. You won’t have a guaranteed percentage, so Google can squeeze you whenever it needs to boost earnings.

Second, just because the percentage payout to the parking companies can’t change during the contract period doesn’t mean the actual amount paid out can’t change, as I’ll explain below.

Let’s consider how percentages mean very little in these agreements, and why Google may have an incentive to collect less per click on the parking pages even if it means Google in turn earns less per click.

In order to understand this you need to consider Google Adwords, the program that supplies ads to Google Adsense. Google Adwords Advertisers generally bid a maximum amount per keyword. But they also set a budget. For example, I may say “Bid $1 per click for these keywords, but I don’t want to spend more than $1,000 a day”.

At first it seems Google will want clicks on all pages — whether part of the Google.com or Adsense sites — to be close to the maximum price. But Google’s margin is much higher on Google.com because it doesn’t have to pay partners. So it has an incentive to have more of the ad budget spent on Google.com than at partners.

For example, assume an advertiser has a $1,000 budget and it is maxed out every day. Google could send half of the traffic from Google.com and half from the AdSense network at $1 a click. Here’s how much Google will make, assuming the partner has a 75% revenue share:

Now, what if Google discounts the clicks on Adsense 50%, arguing they aren’t worth as much as those on Google.com? The advertiser still wants to spend $1,000 a day. So the rest of the traffic goes to Google.

As you can see, Google needs to merely shift the budget toward its own properties to earn more money. The advertiser gets more clicks, too. Google can pay the same percentage to parking companies but pay less per click, while at the same time making more money for itself.

Note that this is against Google’s stated goal of offering the best deal to the advertiser. If both Google.com and Adsense convert at the same rate, the second option gives the advertiser more conversions. But a third option of all Adsense traffic would be the best for the advertiser, but the worst for Google: it would only earn $250.

Is Google squeezing us already?

A lot of people cite Google’s Traffic Acquisition Costs (TAC) metric to show that advertisers are getting less. But the metric says very little about partner payouts. Here’s a graph of TAC updated in Q3 2008: 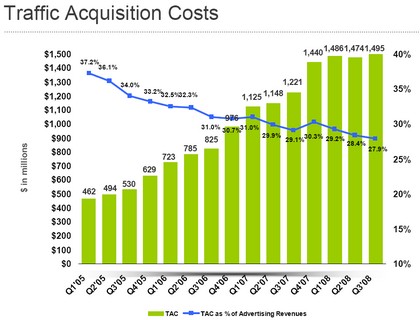 Above: a graphic that means a lot to investors but little to partners.

The blue line represents Google’s expense for traffic as a percentage of advertising revenue. The green bars primarily represent the amount paid out to traffic partners.

Many people point to this falling percentage — 37.2% in Q1’05 and 27.9% in Q3’08 — to show that Google is paying its partners less. But this number means very little, because we don’t know what percentage of traffic is generated on Google.com versus Adsense sites. In fact, you can see that Google is actually paying more to partners now than before. But again, without knowing the actual traffic amount we know very little.

Indeed, revenue on Google.com and other Google properties increased 34% in Q3’08 compared to one year earlier. Revenue on Adsense increased only 15%. But this is revenue, not traffic, so we still don’t have much insight into if Google is paying more or less to its partners. It’s a black box, and only Google knows what’s inside.

A Ticking Time Bomb
There’s one other thing that could drop parking partners’ shares of revenue overnight faster than a gradual squeeze.

In the NameMedia agreement (and I’m told the same goes for other agreements) Google retains the right to eliminate the search ad feed. Search ads generally pay more than content ads. So overnight, domain owners could see a massive drop in revenue. Google is required to provide a replacement feed to NameMedia if it removes the search feed. If the replacement feed doesn’t perform within x% of the search feed, NameMedia has one recourse: cancel its agreement with Google.

Canceling the agreement doesn’t seem like a good alternative.

Should we bite the hand that feeds us?

For all of the complaining about Google, keep in mind that without Google the domain industry would be a shadow of what it currently is. Google’s ad network has propelled the parking industry to where it is today. Should we not complain about Google’s market power? Should we be thankful for what it has given us and not question its motives?

It’s a tough question. We know our parking revenue is dropping, but is it because Google is squeezing us? Because it’s a black box, partners’ relationships with Google are based on trust. And Google has been losing a lot of trust. Notifying parking partners of a drastic change in competitive strategy just a day or two in advance doesn’t build trust.

It’s good to question authority. Which is why we shouldn’t all run out and thank goodness that Google is cutting out the middleman.