Total revenue was $760.5 million, up 11.9% year over year, or 13.3% on a constant currency basis. The revenue number hit the midpoint of GoDaddy’s forecast for the quarter.

The company also announced that its Websites + Marketing platform now has over one million paid users. The company reinvigorated the product with a new brand in September.

For comparison, Wix had 4.3 million paid users at the end of Q2 this year.

I’ve used the updated Websites + Marketing platform and believe it is well positioned for growth. Of all of the major website builder platforms (Wix, Weebly, Squarespace), GoDaddy’s is by far the easiest to use and set up a website quickly.

I still remember a conversation just before the Super Bowl in 2005. I was eating lunch with a bunch of techies and the topic of Super Bowl commercials came up. Someone asked “who is this Go Daddy company, anyway?”

Flash forward to 2010. If you ask someone on the street where they would go to register a domain name, they’ll likely say “Go Daddy”. About half of all newly-registered domains are registered at the company.

Go Daddy continues to grow like gangbusters. I’ve reported some of the company’s numbers on Domain Name Wire before, but yesterday I had a chance to get an official historical look at the company’s growth from Ryan Corder, Senior Director of Finance for the company. 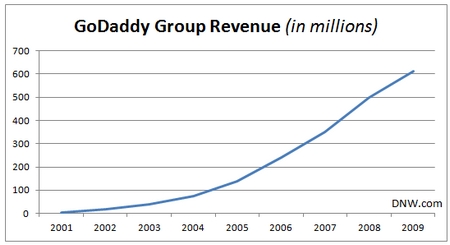 The company’s growth since the opening up of registrar accreditation has been staggering. In 2001 the company grossed $4.3 million in GAAP revenue; last year it hit $610 million. I had previously reported revenue of $750 million for 2009, but this was actually sales. (As a growing company, GAAP revenue lags sales because sales are recognized over a period of time.) For 2010 the company forecasts between $940-$950 million in sales.

Perhaps more important as a privately-held company is Go Daddy’s cash flow. The company forecasts an operating cash flow of $140-$150 million for 2010.

Go Daddy’s employee base has grown with the revenue, bringing much needed jobs to Arizona and Iowa. In 2003 the company employed 323 people; it now keeps 2,700 (and growing) on the payroll.