[Update: the problem was resolved on Thursday, but I’m hearing from other GoDaddy customers about intermittent issues.]

GoDaddy experienced issues with its hosting platform Thursday evening. Sites that use its Managed WordPress products were down as of the time of posting. The issue appears to have begun around 3:45 PM PDT today and was resolved arond 5 pm PDT.

The GoDaddy system status page did not reflect the outage but GoDaddy confirmed the issue via its Twitter account. It did not offer an expected time to restore services.

In November 2020, GoDaddy faced a widespread outage that impacted all of its front end services and websites. It lasted about four hours.

Well, that was quick.

The first federal lawsuit seeking class action status has been filed against GoDaddy for its downtime on September 10 (pdf). The outage affected GoDaddy.com and many people who used the company’s DNS and web hosting services.

Of course, Go Daddy’s guarantees include language that defines what the customer is entitled to if the uptime guarantee is not met.

The legal agreement on GoDaddy.com refers to the 99.9% webhosting uptime guarantee and the remedy:

“you may contact Go Daddy and request a credit of 5% of your monthly hosting fee from Go Daddy for that month. The credit may be used only for the purchase of further products and services from Go Daddy, and is exclusive of any applicable taxes.”

For Premium DNS Manager, the guarantee states that customers will get a service credit for two months for any affected services. However, the terms note that you must open a ticket to request this credit.

Mitchell says that he was only offered a 30% discount off of new products or renewals. According to the suit, other people were offered account credits but they were not applied automatically. (My reading of Go Daddy’s policies is that credits will not be automatically applied and the customer has to request them.)

The plaintiff in this case has a penchant for filing lawsuits whenever a service provider drops the ball. He appears to be the same plaintiff in an action against RIM for a blackberry outage. It’s also the same law firm.

Yesterday Go Daddy suffered a major outage that appears to have involved its DNS services. The outage lasted about four hours.

Back in May I switched from a small web host to Go Daddy, which means that Domain Name Wire was offline yesterday as a result of the outage.

Let me start by saying that downtime for your web site sucks, and yesterday was a frustrating day.

But does it make sense for someone like me to change hosting providers as a result of yesterday’s outage? I don’t think so.

I left my previous host because of site downtime. The downtime usually hit when I had a big traffic surge, which is the worst time your site can have issues.

Since changing to Go Daddy I haven’t had any downtime until yesterday. Although I haven’t had any huge traffic surges (which I’d define as 500+ visitors on the site at a time, which is a lot for a niche site), the hosting has handled much smaller traffic surges with ease. The same surges that would have brought my site down with the previous host.

So overall Go Daddy is working really well for me.

But even if I were to switch hosts, who would I go to? That’s where you need to take a step back and put Go Daddy’s downtime in perspective.

As soon as the Go Daddy problems started yesterday, countless hosts started pitching Go Daddy customers to switch. But many of these same hosts have had multiple outages in recent months!

Consider the big (and I mean BIG) customers that use Amazon’s cloud computing services. Many of them have had outages that lasted over a day.

Is it acceptable? Absolutely not. But a one time outage is understandable. Go Daddy will figure out what happened and prevent it from happening again.

Some people may think this analogy is silly, but it kind of reminds me of when there’s an E. coli outbreak at a national restaurant chain. Lots of people stay away from the chain for the next couple months. But really eating at that chain is probably the safest place to eat once the outbreak is taken care of…because the chain is being extra vigilant.

Yesterday was frustrating. No doubt about it. But not enough to warrant changing web hosts.

GoDaddy.com and access to millions of sites finally being restored. 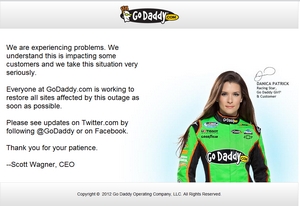 With domain name registrar Go Daddy and millions of sites down today, clicking on a Google search result was a bit like playing roulette: you might get a blank result.

A Go Daddy spokesperson told me the problems began around 10 am PDT today. I was in a meeting at the time, and saw a tweet from Go Daddy about site problems. I clicked over to GoDaddy.com and it didn’t resolve.

I then checked Domain Name Wire, which is hosted with GoDaddy, and found it was down. My blogging colleagues Elliot Silver and Kevin Murphy had non-resolving sites as well.

Domain Name Wire came back for a bit, then it kept resolving but showing database errors.

I’m finally getting back…the first traffic appears to have hit Domain Name Wire again around 4:45 PM CDT. The GoDaddy.com site is back up with a landing page but is not operational yet (see picture above).

Obviously this is very frustrating as a site owner using GoDaddy hosting.

However, it’s not as painful as my previous experience with web hosting.

1. When my site would go down, I wasn’t sure if anyone was working on it or not. At least in this case you know hundreds of people are running around trying to restore service.

2. My last host had problems precisely when I couldn’t afford it: when I was getting a lot of traffic. So far Go Daddy has handled my hosting fine when I’ve received a spike in traffic.

3. It wasn’t just me who was down. For some reason that brings comfort.

Finally, I’ve got to say it’s ironic that the outage managed to bring Downforeveryoneorjustme.com down, too.

As of right now the site, which is not hosted on GoDaddy, shows that it’s over its serving quota.