The top level domain operator of your domain name can play God. 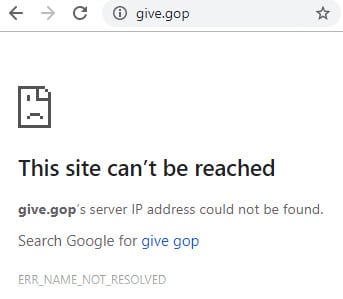 You can no longer access Give.GOP thanks to a dispute between .GOP operators and the site owner.

He who controls the top level domain can control all of its registrants.

That’s the lesson for users of .GOP domains.

The .GOP registry, which is operated by Republican State Leadership Committee, has forced the owner of Give.GOP to take down his site because it was worried that it was taking away focus from a Donald Trump-endorsed competitor, Politico reports.

According to .GOP’s acceptable use policy, its philosophy that “The Registry supports the sharing of diverse ideas over the Internet and intends for the online community to fully reflect the varying viewpoints and debates taking place in our community.”

I don’t see any way that Give.GOP violated the use policy. But, like most acceptal use policies, it states that the registry can do whatever it wants. In fact, it could divert Give.GOP traffic to another domain, if it wishes.

Give.GOP probably should have gone with a .com domain. Or .Republican,which is run by a more neutral operator, Donuts.

GiveGOP.com forwards to Give.GOP. It’s hard to tell who owns it because of blocked Whois records.