[Update: the tool is now live] Domain name registrar GoDaddy is launching a GeoDomain research tool to help domainers find local domains, such as cityHotels.com. The tool will be launched no later than Monday.

Users enter a location (such as a city or state) and can also add keywords, such as “hotel”. The tool then loads a map of the area with pinpoints on each location, which represent available domains or domains on GoDaddy’s aftermarket. Users can zoom in or out to get additional level of detail.

For example, if you search for “Texas” and “Hotels”, it would pull up HoustonHotels.com, DallasHotels.com, etc. (Of course, these domains are taken and wouldn’t show up.)

When the system is live, the tool will be available at geo.godaddy.com and GeoDomainMap.com. 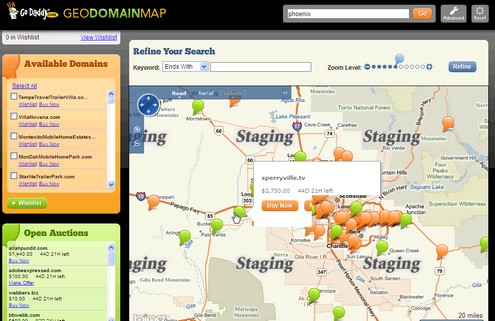 CNN published a story yesterday titled Future of online news may be ‘hyperlocal’. The story discusses the crop of news sites popping up to fill the void not addressed by traditional media and the void left when local newspapers disappear.

Geo domain owners are well positioned to take advantage of both the fall of traditional media and “hyperlocalization”. It was one of the key themes at the 2009 GeoDomain Expo. The article mentions former newspaper writers forming online news startups such as the Seattle PostGlobe. One of PostGlobe’s writers spoke on a panel at GeoDomain Expo.

As I survey the business opportunity in the wreckage of the local newspaper, I’ve realized that trying to do what the traditional newspaper did — be everything to everyone — is not the way to go. The goal should be to focus on a particular niche of news, even if it’s for just within one city. In fact, I’ve been hatching a startup idea over the past few days that will do just that.

(Thanks to Domain Capital for the tip.)

Value of newspapers plummets to point that real estate is most valuable asset.

This is a common story. Because they need to be close to the action, many newspapers set up their headquarters near downtown. As city populations swelled and urban revitalization occurred, the land these headquarters sat on became the most valuable part of the company. When the Austin American-Statesman was posted for sale recently, many opined that its real estate would be a key asset.

The Boston Business Journal article quotes analysts who think The Boston Globe could sell off its Boston.com assets for $20M. Boston.com is one of the most successful city sites on the web and is ranked #254 by Compete.com.

I found this story particularly interesting after attending GeoDomain Expo last week. More and more geo domain owners are getting into the news business. But print newspapers drive a lot of the traffic to the corresponding web site. They complement each other. City.com owners will need to do more than just count on their brand if they wish to become news organizations.

[Hat tip to Rob Sequin for the article.]

Look at the maximum population, not the total population of multiple locations.

There are a number of ways to value a geographical domain name such as a city. One factor that certainly matters is the population of the city. All else being equal (and it rarely is) a city of 100,000 people is better than a city of 10,000 people.

I often see people selling geo domains and advertising that there are multiple cities of the same name. A name like Springfield.com, for example, could refer to many U.S. cities. But you should be careful about valuing a domain based on the total population of these cities.

Consider this example. There are 2 Bastrop cities in the U.S. in Wikipedia. These cities have populations of 13,000 (Louisiana) and about 10,000 (Texas). If you plan to develop Bastrop.com into a directory for either city, it would be foolish to value the domains be adding up both populations (23,000). After all, you can only address one of these cities with your web site.

Of course this assumes you plan to develop the domain. From a resale perspective, the fact that there are two cities with this name increases your odds of a sale. However, you can still expect the person buying the domain from you to look at one city or the other, limiting the total addressable population to 13,000.

Local search evangelist pushes forward with Adhere. Is it enough?

Marchex (NASDAQ: MCHX), the company that helped make domain portfolio sales popular with its purchase of Yun Ye’s portfolio, is moving forward with its local ad plans by integrating two platforms. The company announced today that it is combining its Industry Brains and Enhance pay-per-click services into a new platform called Adhere. The goal is to bring local online advertising to the masses in a simple manner.

It makes sense, but will Marchex be able to pull it off? The domain industry should be hopeful, as Marchex represents one of the true challengers to Yahoo (YHOO) and Google’s (GOOG) duopoly on domain name advertising feeds.

After bottoming out at $7.51 on February 14, shares of Marchex have been on a tear, closing as high as $13.66 last week. This comes during a period of turmoil for many other companies in the domain name industry. Part of the company’s secret is that it has its own ad network and isn’t solely at the mercy of Yahoo to deliver ads.

The company has had execution problems in the past, and many investors have called on it to go with a simple and more profitable domain parking strategy (ala Frank Schilling). But with parking in jeopardy, perhaps Marchex’s heavy infrastructure investment strategy will pay off.