Army vet set up site to criticize spending on football. 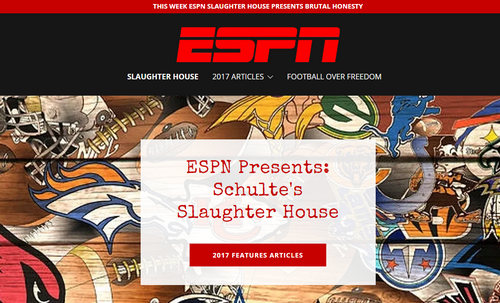 An Army vet set up ESPN Slaughter to provide commentary on spending on football.

Sports network ESPN has convinced a National Arbitration Forum panel to give it the domain name ESPNSlaughter.com.

The domain name was used by a U.S. Army veteran for commentary about the National Football League.

With a name like ESPNSlaughter, you might think it had to do with the damage football causes to players’ brains. But Andrew Shulte has a different gripe: he thinks the money that goes to build stadiums and pay players could be put to better use helping society.

Schulte is a self-professed football fan but suggests a one-year NFL timeout to put money toward other causes. Of course, the NFL couldn’t pay those salaries if it didn’t play for a year, but that’s another story.

ESPNSlaughter.com mimicked an ESPN site and even had a notice “Brought to you by ESPN Media a Disney Co.”

National Arbitration Forum panelist Richard Hill found in the sports network’s favor, ruling that the domain name should be transferred.

Criticism sites are somewhat immune to cybersquatting claims but the site owner wasn’t directly attacking ESPN. He also didn’t respond to the claims.