Hear from 16 people who were at NamesCon Global.

NamesCon Global 2019 is in the books, and this week we’ll catch up with 16 people who attended NamesCon. After discussing some of the week’s news you’ll hear from:

This week’s sponsor: DNAcademy. Use code DNW to save $50.

Subscribe via iTunes to listen to the Domain Name Wire podcast on your iPhone or iPad, view on Google Play Music, or click play above or download to begin listening. (Listen to previous podcasts here.)

Reports show domains as an investment and the latest trends.

The first is a comparison between domain name returns and returns of other asset types such as stocks, real estate and bitcoin. It calculates returns based on domain types, such as two number, three letter, etc. It shows that overall returns aren’t spectacular but that the asset class is more stable than some others. One dataset I’d love to see is a rate of return of domains that have been transacted more than once on Escrow.com. 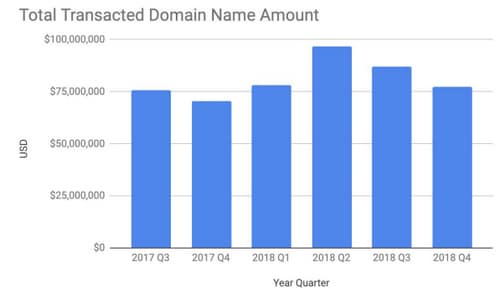 As you can see, transaction amounts have slipped for a couple of quarters but were up in Q4 2018 compared to Q4 2017.

The report also breaks down median prices of domains by length over time. There’s also a chart showing dollar volume by country.

You can review both reports here (pdf). 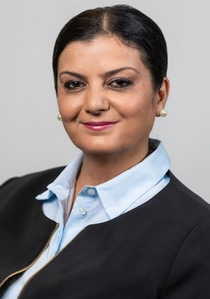 Escrow.com has hired a compliance offer to handle its Anti Money Laundering Compliance Program and other regulatory issues.

Fereba Ashufta joins Escrow.com from HSBC, where she was a Regional Regulatory Compliance Officer.

Escrow.com is a popular escrow service for many types of transactions but much of its business is with domain names. It has amped up its know your customer (KYC) processes in recent years, requiring both buyers and sellers to provide proof of identification.

The company says Ashufta will be in charge of its Anti Money Laundering Compliance Program as well as the company’s regulatory relationships and obligations.

“As a market-leading escrow service provider across the United States and further afield, regulatory oversight plays an essential role in our business and the assurance we continue to offer to our customers and marketplace partners,” said Jackson Elsegood, General Manager of Escrow.com

Domain name is in escrow at Escrow.com. 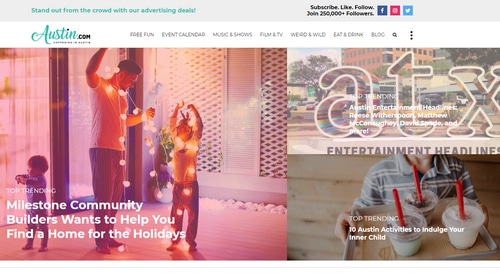 Austin.com is in escrow at Escrow.com.

The Austin.com domain name appears to have sold and might be on a payment plan.

iEstates, LLC purchased the domain name in 2012 but put it up for sale earlier this year. An October 4 DomainTools Whois record shows the domain was in escrow at Escrow.com. The domain was transferred from Moniker to GoDaddy at that time.

The Whois record still shows Escrow.com, suggesting that the domain name is on a payment plan or other sort of arrangement that will require Escrow.com to hold the domain in escrow.

I searched the site for clues about who might now own the site but the terms of service and management information haven’t changed since before October. New content continues to be published. 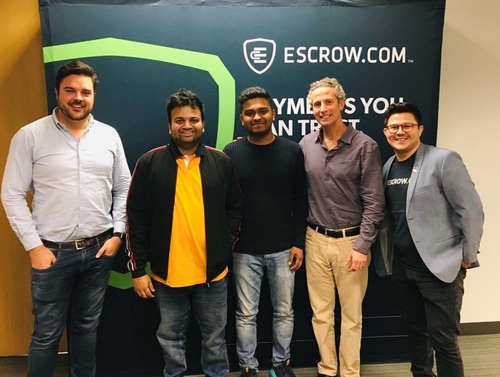 Michael Cyger of DNAcademy has sold the domain name Brew.com to the team behind BuyMeACoffee.com, which is a sort of tip-a-creator service. Here’s co-founder Jijo Sunny mentioning the acquisition on Twitter:

1/ 👋 Excited to share what we’ve been building at https://t.co/GOQJ7LjQ2t + we are going to tweetstorm our progress every week!

Cyger had been using BuyMeACoffee on his website. As Sunny describes it, a deal quickly transpired from there:

It started with a cold email. Guess what? He was using BuyMeACoffee on his blog, and was excited to hear about what we’re building next. Within 2w, we signed the deal at @Escrowcom’s SF office. You’re a pleasure to work with @MichaelCyger!

I actually read about Buy Me A Coffee on HackerNews in February and thought their design and implementation was elegantly simple and beautiful. So I signed up for an account to check it out, and then integrated the Buy Me A Coffee button on the public blog of DNAcademy to see how it worked. So far, about 10 people — who are not subscribed to DNAcademy as students — but who appreciate the content I produce — have purchased me a cup of coffee, which I like much more than displaying programmatic ads because it’s cleaner, creates a more direct relationship with readers, and earns more revenue per reader.

While financial terms were not disclosed, Cyger expects the deal to eventually be worth seven figures after the company gains traction. He will join Brew’s Advisory Board.

Cyger met up with the BuyMeACoffee team at Escrow.com’s office to complete the deal (see photo).

The company will not rebrand its BuyMeACoffee.com service as Brew.com. Instead, it’s launching a new site on Brew.com using what it has learned running BuyMeACoffee. Based on Sunny’s tweets, it seems like it will be a type of Patreon service, perhaps providing people with an ad-free subscription to content.