It is truly a quarter where it would be a lot easier to be private than public, but all of that makes me continually grateful for the nature of our investors.

The results weren’t nearly as bad as the headline numbers. In Q1 2018 the company accelerated revenue recognization for domains it transferred to Namecheap. Take that out and the revenue number slipped just 3%.

That’s still the wrong direction and there were some hits during the quarter, but Noss says they’re just short-term. The company had setbacks on Ting Mobile and in the domain aftermarket. Expired domain revenue was lackluster.

But Noss points to the company’s long-term trends in fiber and fixing some carrier relationships for mobile as pointing in the right direction. The Ascio acquisition will also boost the company going forward.

Brand protection company claims registrars aren’t cooperating, but there are two sides to the story.

Tucows CEO Elliot Noss has responded to claims made by brand protection company AppDetex over access to Whois data.

AppDetex has raised concerns that domain name registrars are not responding to or are denying requests for Whois data when it has a legitimate interest. It made its first claims just before the ICANN conference in Panama this summer and timed its second complaint for just prior to ICANN 63 in Barcelona this week.

In its most recent complaint to ICANN (pdf), AppDetex said that registrars were only “fully complaint” to 2.5% of its requests.

In response (pdf), Noss called AppDetex out for its own non-compliance.

AppDetex has submitted (as of this letter) 1273 requests for Registrant data to Tucows-family registrars. Up until October 9th, 2018, we responded with our requirements template to all of them and had not received a single reply. The claim in their letter of contracted party failures to respond in a reasonable time frame is outrageous as they have failed to further their own requests for months.

Additionally, it seems that Facebook and AppDetex have been submitting automated queries without sufficient human review. Noss points to requests for data on “lincolnstainedglass.com” and “grifflnstafford.com” as examples. These were likely included because they include something visually similar to “insta” in them. Facebook has trademarks for Instagram.

We are also concerned that, given the clear lack of human-review and due care presented by the requests we have received from AppDetex, they are simply creating algorithms to identify potential infringements and demanding personal Registrant data for these potentialities wholesale. The examples we have noted above—and many others—could have been easily identified by AppDetex prior to submitting to Tucows if they had included the reason that the domain was suspected to be infringing, rather than the mere assertion that it “misuses one or more of the following trademarks” and then listing seven trademarks. We require that requests for personal data include the reason for the valid request.

Tucows, the second largest domain name registrar, has been one of the registrars leading the discussion on the EU’s GDPR. Earlier this year it launched a site for parties to request access to masked Whois information.

Noss explains the evolution of Tucows. 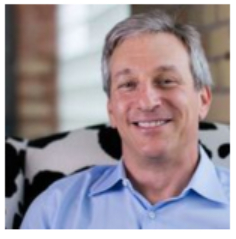 Tucows (NADSAQ: TCX) started in the early 90s as a software download site, but is now one of the world’s largest domain name registrars and has a market cap of about $250 million. CEO Elliot Noss explains a common thread in Tucows’ transition from downloads to domains, and now a provider of mobile phone and internet service.

The company says it has launched an “aggressive program of experimentation” on landing pages for its domain names to push more sales leads to network partners.

I just went to six of the company’s domain names. They were all parked with DomainNameSales.com and included a header banner with phone numbers and a link to BuyDomains.

2. The company is letting some of its surnames domain names expire.

Tucows owns a lot of surname domain names thanks to its 2006 acquisition of Mailbank. The company said that it let registrations on some of these domains lapse during the quarter.

This may not be the first time the company has done this. Take a look at what happened with Jeffers.com.

3. New TLDs are now getting 6.5% marketshare of new registrations of .com/.net.

Tucows looked at new TLD registration numbers and compared them to public data from Verisign about .com and .net. Tucows calculated the new TLD market share of new registrations (with the market defined as new gTLDs+.com+.net) at 6.5% of this base.

I suspect this includes new TLD registrations activated by the registries themselves, which means the actual market share was a tad lower. However, Tucows’ Hover recorded about 6.5% as well, validating this overall number. Hover also didn’t participate in any landrush periods.

Note that this is merely a comparison to .com/.net. When you add in ccTLD registrations and other gTLDs the market share is lower.

4. Tucows is adjusting its domain search to a new reality with new TLDs.

For years, we have assumed that most Hover visitors would not find a suitable domain in their first few attempts and therefore, focus much of the customer experience and helping them find the right one. With the launch of new gTLD’s, we now believe most people will be able to find a suitable domain quickly and we’re rethinking our search results accordingly. This work will continue through the year.

Could this mean more focus on new TLDs and less on premium aftermarket domain name sales?

Tucows released Q4 2013 earnings and held its investor conference call this week. Here are some highlights:

* Tucows started charging for WHOIS privacy due to increased costs the company faces with the 2103 Registrar Accreditation Agreement.

* Domain parking is still a drag on the company. It expects a flat or downward trend. This also affects its expired domain sales revenue.

* The company sees GoDaddy’s acquisition of Afternic as a good thing because it will bring additional expertise to the secondary market for domain names.

* The company doesn’t expect much of a financial impact from new TLDs in 2014. Any impact will be in late Q3 and Q4 when better strings come out after resolving contention sets.

* Of the two sets of TLD launches so far (presumably Donuts’ first two batches of seven domains), people thought the first batch had better domains. But the second one outperformed the first, at least in the first couple days of availability. Tucows determined this is likely an awareness issue, so as people become aware of new TLDs launches might perform better. (It all gets back to new TLDs “coming out with a whimper“.)

* The company started advertising Hover on TV and Ting (its mobile phone service) on TV, in movie theaters, and outdoor. It hasn’t been as effective as authentic endorsements and strategic partnerships, but Tucows will continue testing. (As an aside, I recently asked an employee why he stopped expensing his cell phone each month. Answer: “Ever since I switched to Ting, my bill is only like $20. So it’s not even worth expensing anymore.”