It’s been a while since I’ve handed out a Domain Dunce award, but this week’s “Shady TLDs” report from security firm Blue Coat is very deserving.

Let’s kick things off with a smelly situation.

By all accounts the Hotel des Almadies, which housed attendees of ICANN’s meeting at its recent meeting in Dakar, Senegal earlier this year, was far from luxury.

That prompted Barbara Ann Clay, ICANN’s Vice President for Communications, to write a nastygram to Senegal’s Minister of Communication asking for compensation for guests. Attached to the letter was a 20 page report from ICANN’s at-large committee (ALAC).

But before the hotel or Minister of Communication could respond, ICANN retracted its complaint, writing that the letter was sent without appropriate buy-in from ICANN’s leadership.

Below: a staircase at the Hotel des Almadies, which ALAC labeled “A dark, steep Staircase” and complained of a “tripping risk”. 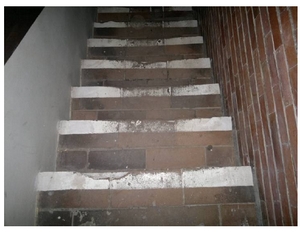 Last year I handed out a couple Domain Dunce awards. But there was so much stupidity in the domain name world this year that I have about five to hand out.

I’m going to coin a new phrase: “circular reference arbitration”. It’s when a UDRP panelist refers to his own cases as precedent, as Mr. Christie likes to do.

I first became aware of Christie’s circular reference antics when reading the case for Parvi.org, a case currently involved in a lawsuit. In his decision handing the domain name over to Ville de Paris, Christie ignored thousands of cases of UDRP precedent and the rules themselves, which clearly state that a domain name must be registered and used in bad faith. Instead, Christie decided that a domain name can be registered in good faith but used in bad faith at a later date and still be handed over.

How did he do this? He cited one of his prior decisions without mentioning that they were his decisions!

In the Parvi.org decision, under the header “Reconsideration of the bad faith requirement”, arbitrator Andrew F. Christie cited previous cases decided by a “distinguished” panelist who found that domain names don’t need to be registered AND used in bad faith, as the UDRP states. Instead, this panelist decided that a domain not registered in bad faith could still violate the policy if later used in bad faith.

The panelist he was referring to was M. Scott Donahey, who referred to an even earlier decision in Telstra Corporation Limited v. Nuclear Marshmallows. Christie wrote “The issue addressed in the [Donahey decisions] is profound, and the panelist addressing them is distinguished”.

What Christie didn’t mention was that he was the panelist in the Telstra case that Donahey relied upon. In other words, Christie wrote the Telstra decision, another panelist agreed, and now Christie is using this “profound” issue as established fact. How’s that for a circular reference?

It gets better. In another poorly decided case (although the ultimate outcome is correct) for ZeroSpam.com, Christie again refers to his earlier decisions without mentioning that they were his decisions.

After determining that ZeroSpam.com was registered well before the complainant had any rights to the term, Christie again stated that this was not enough for the respondent to win the case. This time he cited Donahey’s decisions, based on Christie’s decision in Telstra, as well as his own Parvi.org case. Again, he didn’t mention his involvement with these cases!

After reviewing the reasoning in the [Donahey cases], the panel in Ville de Paris v. Jeff Walter, WIPO Case No. D2009-1278 (“Ville de Paris”) came to a similar view.

Perhaps this should read:

After reviewing the reasoning in Donahey’s cases, which were based on my reasoning in Telstra, I agreed with myself in WIPO Case No. D2009-1278 (“Ville de Paris”).

Mr. Christie has done a slick job using circular references to his own decisions without mentioning that they are his own decisions. He has also decided that, for each UDRP case he receives, he will pervert the definition of “registered and used in bad faith”.

For that, we give Andrew Christie a 2009 Domain Dunce award.