Whois information for one of the world’s largest country code domain names is about to change.

DENIC, the group that runs Germany’s .DE domain name, announced changes that will slim down an already restricted Whois output. The group reviewed its Whois policy as GDPR gets ready to go into force.

The change will involve adding two non-personalized email addresses that will be managed by the registrar. One address will be for general and technical requests and the other will be for abuse.

Users who show DENIC that they have a legitimate interest in personal data will be able to request it through a semi-automated system.

The .De domain has over 16 million registrations.

eco – the Association of the German Internet Industry released its third Registrar Atlas this week. The Registrar Atlas is a survey of businesses that offer domain names. The non-scientific survey targets mostly Germany, but includes respondents from eight countries primarily in Europe.

.De registry DENIC sponsors the survey, along with a number of other registries such as Verisign.

DENIC issued a press release (pdf) about the survey results. Not surprisingly, DENIC’s release focuses on downplaying the effects of new TLDs on the German domain registration market.

The organization reports that more than 80% of German registrars that participated in the survey don’t expect new TLDs to cause a drop in domain registrations for .de.

There are a number of German geo top level domains on the horizon, which could conceivably compete with .de. Companies have applied for .cologne, .bayern, .berlin, .hamburg, .koeln, and .nrw (North Rhine-Westphalia). I believe that’s the highest concentration of geo TLD applications for any country. Many applicants were no doubt attracted by the success of .de, which is generally considered the most successful country code domain name.

eco’s report suggest that many of the respondents are taking a cautious, low investment approach to new TLDs. This shouldn’t be a surprise given that many of them count on hosting and other services for much of their revenue. Many of the businesses plan to sell new TLDs as resellers rather than getting their own accreditations to each registry, which would be a cumbersome process for a small domain seller.

DENIC’s press release about the survey also reports that “three thirds” of participating German registrars think the share of new TLDs in their overall inventory of domains five years from now will be less than 10%.

With numbers like that, DENIC has nothing to worry about.

.De data is a good PR and marketing tool. 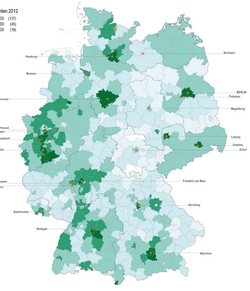 I must admit that I don’t follow the .de domain market much. I should, since Germany’s ccTLD is the largest country code domain name in existence with over 15 million domain registrations.

There are a lot of reasons for .de’s success, and it’s clear that one of its success factors is marketing.

Today .de registry DENIC sent a release to me about its latest data on regional registrations. Since 2004 the company has been collating data on which cities and regions in Germany have the most .de domain registrations. It’s interesting to compare this data to prior years.

I think this is pretty brilliant. You may not consider it marketing, but the local press (at least in the U.S.) eats up stories like this. “We’re ranked number 1!”

Other country code operators should take note. (I’m looking at you, Neustar.)

Auction timing is a mixed bag.

So far three of the thirty domains have received bids and met their reserves. The top domain is moviedatabase.co.uk at 210 GBP.

I spot checked five domains and they were all owned by Sedo subsidiary DomCollect, so this appears to be a house auction.

On one hand, the timing for the end of this auction couldn’t be better. The company announced the blockbuster sale of webhosting.co.uk for $500,000 yesterday.

On the other hand, Nominet’s plans to release second level .uk domains (and not necessarily give them to the owner of an existing equivalent third level domain) has to give pause to potential buyers.

Sedo also has a .de auction kicking off tomorrow that appears to be DomCollect names.

From “anything goes” to “nothing goes”, changes to .Cn registration enforcement will reduce the number of .cn domain names.

China’s domain name strategy has always perplexed me. For a country known for censoring just about everything, I found it odd that the country was essentially giving away .Cn domain names for about 14 cents.

The low cost catapulted China above Germany for the most registered country code top level domain name, a status that China once again regained in the fourth quarter of last year according to VeriSign’s latest market report. (At last count, .de has nearly 13.5 million domains registered. Numbers from CNNIC for the end of last year show a similar number of .cn domains.)

But then early this year, China suddenly realized it had a problem. .Cn was out of control. So .Cn registry CNNIC announced it would crack down on individuals registering domains, and forbid non-Chinese registrars from offering .cn.

And so the quick rise of .cn will also be a quick fall. .De, welcome back to the #1 spot.