Hite Capital sold the Mint.com domain name to the recently sold finance web site for equity a few years ago. It has paid off, according to an article by Michael Arrington on Tech Crunch.

…Mint gave a “substantialâ€ amount of Series A stock to Hite Capital in exchange for the Mint.com domain name. That stock was worth a “couple of million dollars,â€ says one source, after the acquisition.

Not bad. For Hite Capital, selling a domain name for equity paid off. (It’s not clear if there was cash involved in the transaction as well.) But selling a domain for equity doesn’t always work out as planned. One high profile case is Business.com, which Marc Ostrofsky sold for $7.5M in 1999. But that wasn’t cash; it was equity. And according to the buyer, it ended up redeeming that equity for only $2.0M in 2004.

ICANN’s blog has a story about one of this week’s “Final Jeopardy” questions on the popular Jeopardy game show: “On March 10, 2003, this nation got control of the .af internet domain”.

The answer is “What is Afghanistan?”.

This trivia got me thinking about a few other possible Jeopardy answers for domain name trivia buffs. Most of the “questions” can be found on Domain Name Wire. I’ll publish them later, but take a crack at them in the comments section.

1. According to eCompanies founder Jake Winebaum, this is how much his company actually paid for Business.com after seller Marc Ostrofsky cashed out his $7.5 million of stock.

2. This company manages the .info registry.

3. This is the new name of the company that paid about $10 million for the domain name IRS.com.

4. The second most popular domain name extension in terms of registration, according to VeriSign.

5. In 2008, he sold his company Name Intelligence to Thought Convergence. 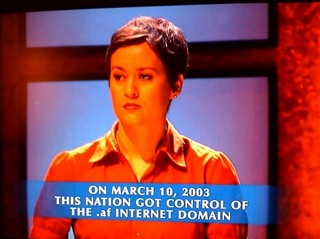