My wife works for a company based in San Francisco, so I often tag along when she heads out there. A year ago I tried to set up meetings with Bay area domain name companies, but then I hit a roadblock: there really aren’t any. I met with the founder of NamePros, got stonewalled by Google (big surprise), and didn’t bother with VeriSign’s Mountain View office.

We’re talking about the center of the tech world, yet few domain companies are there. So it was great to find out today that Bido is moving out to the Bay Area, and I certainly understand why. (On the other hand, welcome to the world of expensive employees, high taxes, high cost of living, and high regulation!)

So where are the U.S. hotbeds for domain name companies? I generally think of Los Angeles, Seattle, and southern Florida.

Seattle: In Seattle you’ll find pioneers such as eNom and DomainTools (both owned by L.A.-based companies now), as well as DevHub, Marchex, and a number of Rob Monster’s ventures. You’re also a short drive to SnapNames, Dotster, and across the border to some of the world’s biggest domainers in Vancouver.

South Florida: The big players here are Moniker, one of Parked.com’s offices, and . But it’s also on the map because some big individual domainers call the area home.

As for my hometown of Austin? It’s mostly developers and web shops. The domainers here don’t think of themselves as domainers, but instead web developers/entrepreneurs. That may change, soon. A notable domain company is taking a look at moving here.

Today the company announced a number of new changes:

1. Name your starting price. No more $28 minimum/maximum. A lower minimum will likely result in more votes.

2. Vote for profits. If an auction you vote for goes to auction and sells, you get a cut of Bido’s commission. The goal is to incentivize you to participate in voting. You only have a certain number of votes you can use.

3. BuyItNow pricing. It costs one Bido credit to set a buy it now price.

4. Negotiations. Negotiate on prices instead of going to an auction.

I like these ideas, especially naming your starting price. I also like voter profit sharing. My only worry — that I’ve voiced before — is that Bido is getting to complicated. Its initial success was due to its simplicity. 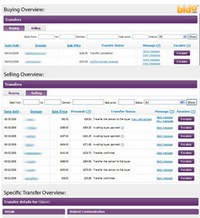 When you sell one domain name a day, managing the payment and transfer process can be done manually. When you start selling dozens of domains a day, it gets more complicated.

Bido has released a new buyer and seller transaction system to make its dozens of daily transactions easier. It includes both buyer and seller overviews and the ability to drill down to manage individual transactions. This self-serve tool is essential when you’re dealing with many sub-$100 sales each day.

I haven’t come across many domains that interested me on Bido lately, until yesterday. Two auctions — DFW.info and LotteryNumbers.us — caught my attention. I ended up bidding on LotteryNumbers.us, although I let someone else have it at $48. DFW.info attracted lots of attention, and sold for $324 with 19 bids. I’m not going to opine on the value of Bido in terms of creating liquidity. But I will say, if you have domains you’re looking to sell for as little as $28, it’s worth taking a look at Bido.

The missing piece of the puzzle glues it all together.

This didn’t sound too appealing to pre-auction buyers. They would essentially bid up the prices of domains, only to face more competition in the real auction.

But there’s one detail that wasn’t in Bido’s original explanation: pre-auction winners get a cut of the commission if they don’t end up winning the “real auction”.

Let’s say I’m a bidder in the guarantee program. In the pre-auction I win with a bid of $500 for a domain. The seller decides to send it to a real auction and the domain sells for $1,000 to someone else. That means I’d get 50% of the total commission (4% of the sales price), or $40. It would give me an incentive to bid high in the pre-auction (let alone participate at all). This should push domain sales prices higher on Bido.

My only worry, as I’ve discussed before, is that this makes things more complicated. But I think it’s a nifty addition to Bido.

You have to hand it to Bido. They relentlessly brainstorm, create, and tweak features to make their platform better.

About a month ago Bido starting allowing multiple auctions per day and allowed users to vote on domains for auction. This caused some problems. Namely, a lot of low quality domains are at auction and selling for less than registration fee. Those that do sell would have sold for more if they were the only auction of the day.

Given some of these shortcomings, I knew it was only a matter of time before Bido tried to correct them. Today the company announced a whole slew of new features. Here’s how I rate the main ones.

Guarantee Program – Domains go through a private “pre-auction” where companies like NameMedia compete to buy the domain. Once the private auction is over, sellers can either a) accept the auction result b) choose to send the domain to a public auction with the guarantee as the opening bid or c) walk away with the domain.

My take: Interesting. I don’t see why any buyers would participate in these auctions. I assume that a seller will always choose option b or c, so the bidders are just helping the sellers get traction.

Auction Acceleration – instead of waiting for the community to vote your domain in after 30 days, pay $8.88 per domain to get them listed right away.

My take: this is basically a listing fee. I like paid listing fees, as they provide an economic incentive for people to submit only good domains.

One Auction Contract for Sellers – No more filling out a contract for each domain you list.

Now, we also have to look at these changes on a global scale. My concern is that Bido is getting complicated. It has moved from one auction a day at $1 to multiple auctions at varying prices with reserves or no reserve, multiple chatrooms, etc.

Overall I’m excited about these changes. And if any of them don’t work as planned, we can rest assured that Bido will tweak them.