Domain parking arbitrage works. But with a domain related domain?

Domain name parking arbitrage brings a select few players massive income. Until recently, individuals got in on the game at Parked.com (until Yahoo (NASDAQ: YHOO) pulled the plug).

For the uninitiated, here’s how domain parking arbitrage works:

1. Buy a click on Google or other search engine

Every major domain parking company forbids this (correct me if I’m wrong).

I came across an interesting arbitrage recently because the ad was targeted toward…domainers. Would a domainer actually click on a domain parking ad? I doubt it.

The search term was “parking domain name”, where this ad for DomainLoyal.com popped up:

This popped out instantly as an arbitrage ad, given its generic nature about the subject “domain name parking”. Sure enough, this is what I saw when I clicked through: 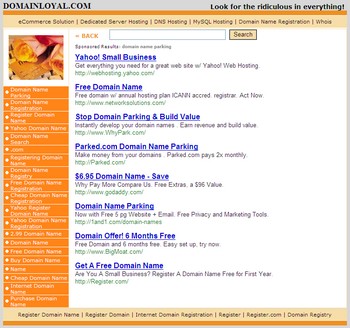 My guess is this arbitrage play isn’t profitable.

Domain ad networks must stop fraud to survive in the long run.

The second point is very relevant to the domain community. Regardless of how direct navigation traffic actually converts compared to search, there is a negative perception of domain traffic. Perception can be more important than reality. When advertisers see referrals they don’t like, they tend to cut back on advertising.

I’ve read a number of forum posts where people complain about Google “Search Network” traffic coming from domain names. They believe it should be considered “Content Network” traffic. And while investigating Yahoo’s (YHOO) decision to nix arbitrage for parking company customers, I saw the same sentiment over and over: advertisers don’t like seeing traffic come from sources that don’t seem natural. It doesn’t matter how much it converts; if an advertiser sees a high amount of traffic coming from some-lame-domain.com, they assume it’s fraudulant.

The net-net is they stop advertising altogether. Why did Yahoo kill arbitrage (except with direct clients, it turns out)? Advertisers were nixing the entire Yahoo ad network because they didn’t like where some of their traffic was coming from. Opting out of content network traffic didn’t help because many parking services use a search feed.

It’s the responsibility of the domain name industry to police itself and provide the highest quality traffic possible. I predict there will be a day when Google (GOOG) and Yahoo have a separate opt-out box for domain traffic. If people don’t trust this traffic, they will opt-out. Game over.

Reaction to Yahoo’s decision mixed, but one thing is clear: a lot of people will be affected.

One day after Yahoo (YHOO) dropped a bombshell that it would no longer accept arbitrage traffic to its advertising feed, the reaction has been swift and loud. I’ve been monitoring domain forums and this is what people have to say:

“well…back to working for a living…”

“I’ll need to get back to SAP consulting. I’ve kinda forgotten some of my transaction codes…”

“Quit whining+being lazy and start developing your domains TONIGHT you all… (this goes to myself too.)”

“MSN and google just lost minimum of 15k a month from me and yahoo just lost the revenue on the back of the traffic I was sending through parked.”

“Many people like me were doing arbi for a living making my 15k a month and to say my traffic was trash is just plain silly. A TQ score of a 10 seemed to be ok with yahoo and parked and since parked only allowed traffic from google and MSN then I assume it was good traffic. There is a lot of people this is going to have an impact on and yahoo has no idea how much. My opinion is this is being done as a direct threat on GOOGLE and MSN in a self survival mode.”

“I think it’s going to be BIG losses actually. I’m going to call my broker on Friday morning…time to get that Google stock i always wanted”

Of course, not everyone is upset. A number of people have come out supporting Yahoo’s decision, suggesting that arbitrage traffic isn’t as good as type-in traffic. If you believe that direct navigation traffic converts better than search, then this would be true.

One thing’s for sure. This move will affect many peoples’ lives. I’m a bit shocked by how many people have jumped on the arbitrage bandwagon making $10,000 or more per month. This could also make even more heads roll at Yahoo. If my back-of-the-envelope calculations are right, Yahoo might have to layoff another 1,000 people to make up for the revenue loss.

Personally, I have not done click arbitrage. However, I’m sure a lot of the affiliate revenue I make from Parked.com is arbitrage. I won’t know for about another month how much of that I’ll lose.

What do you think? Was arbitrage good? Bad? Was this a good move by Yahoo?

Yahoo will stop allowing arbitrage as of this Friday, will affect other major companies as well.

In a major move sure to have ramifications across the online advertising industry, Yahoo (YHOO) has told its advertising partners that it will no longer accept “arbitraged” traffic as of this Friday. Here’s a look at what this means for domainers and even the revenue of big online advertising companies.

Arbitrage Explained
Click arbitrage involves buying an ad click at a low price and the traffic to a page of ads with high-priced ads. For example, you may bid 5 cents for a click at Google and earn 25 cents per visitor clicking on your ads.

Who does (did) it?
Everyone from individual domainers to big companies such as Marchex (MCHX) and NameMedia. Individuals did it through parking companies such as Parked.com and HitFarm (sometimes using sneaky tricks on the latter). (Other parking companies, such as Sedo, expressly forbade arbitrage.) I’ve heard stories about people quitting their jobs because they were making so much money with arbitrage. Generally speaking, this arbitrage has been from traffic at Google and Microsoft sent to Yahoo ads.

Who will be hurt by Yahoo’s change
A lot of people, and some aren’t immediately obvious.

Let’s start with the obvious. People who have used Parked and Hitfarm to create arbitrage revenue will be hit hard. It’s hard to estimate how many people this is, but it’s substantial. Word on the street is that this rule may also apply to people using the Yahoo Publisher Network for ads.

Big companies will also take a hit. When Google (GOOG) changed its algorithms in an effort to decrease arbitrage, a number of big players took a hit. This time around it will be worse. After doing some sample searches today and talking to people in the industry, I think this may put NameMedia’s IPO on ice for now. Marchex also appears to be heavy in the arbitrage game and will feel the pinch. [Updated 2-13-08: I’ve heard now from two places that big companies like Marchex will still be able to do arbitrage. I’m looking into this.]

Don’t fall into any of those categories? This will still affect you if you are a Google shareholder, if you park domains on a Google feed, or if you have Google Adsense ads on your site…

Much of the arbitrage has been between ads on Google sent to landing pages with Yahoo ads. Although Google has eliminated some of the arbitrage, test searches today show a number of arbitrage sites showing up for most keywords. This has propped up click prices, which may tumble as a result. This will be especially prevalent on Adsense sites, since Google doesn’t filter out arbitrage ads as much on Adsense sites compared to its search results.

This could cause Google’s earnings to drop next quarter. Some sources suggest that Yahoo earns as much as $200 million a year in arbitraged traffic.

Who wins?
The first winner is legitimate advertisers on Google’s network that have fewer advertisers to compete against. (Of course, Google could just change its black box algorithm to increase minimum bid prices.)

Yahoo is making this move with the long term goal of boosting click prices on its own network because it believes click quality will be better. I don’t necessarily believe this, and I don’t think Yahoo’s advertisers really know what’s going on. I think arbitraged traffic might covert just as well as regular traffic.

The irony is that, by taking a short term hit to its own earnings, Yahoo has made a competive play against Google. But why now? Why when Yahoo is facing buyout offer(s)? Perhaps this decision wasn’t made with consideration to the buyout. Or maybe Yahoo thinks other sources of revenue will more than cover the arbitraged traffic.

Stay tuned, and remember that all is not well in the domain industry.

Arbitrage involves making money because of a price differential between two markets. These days some people seem to be making a lot of money buying ads and sending the traffic to higher-paying ads on their domains. Not everyone is happy with this. Google, in fact, canceled some AdSense accounts because of this practice several months ago (the same time that they canceled accounts for “made-for-AdSense” domains). Admittedly it’s not a great user experience to click on ads and land on a page that has more ads.

The parking company TrafficZ recently made all of their domain owners confirm that they read a statement prohibiting arbitrage. One company, Parked, continues to semi-officially allow arbitrage.

Why is arbitrage often frowned-upon? In addition to the generally poor user experience, some people don’t seem to be targeting their ads properly. If you do try arbitrage (where it is allowed) be sure that the ads you buy are clearly targeting the same subject area as the ads on your target site. This is important for two reasons.

1. You may get your ads shut down if you are buying ads that target a completely different area.

2. If your ads are off-target nobody is going to click on the PPC ads on your site anyway. You are paying for this traffic, so you certainly want it to convert.

If you are going to try arbitrage, then start small. Open an account at Parked and park some domains with natural traffic there first. Get accustomed to their tools and their control panel. Consider using their customization tools to build out your site with attractive and useful content; but be aware that too much content can distract people from clicking on the ads. Once you decide to direct some paid traffic to your site keep good records of what you are spending and what you are making. Start small and cancel paid ads that are not converting.

Thanks again, Andrew, for the opportunity to post here from time-to-time.