Learn what Adam Strong is doing to increase his domain name sals.

This week we talk with domain name investor Adam Strong. Strong, who owns about 15,000 domain names, explains how he has been able to increase his sales in recent months. He also discusses pricing your domain names and why he avoids zero click domain parking. Domain investors will learn a lot in this episode. Also: GoDaddy buys more domains, domaining in Europe, WooCommerce extensions, Escrow.com API and more.

Adam Strong discusses what type of domains he’s currently investing in and his domain-related businesses.

Domain name investor Adam Strong has been in the game for a long time. But some of his bigger successes aren’t domains he bought 15 years ago. On today’s show, he talks about his recent 6-to-7-figure flip, NameBio.com data for new TLDs and China, and the challenges of operating a business. 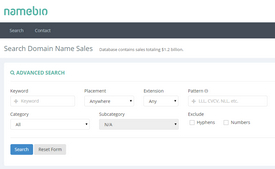 Domain name sales database NameBio.com has been overhauled, and one of the new features should prove useful when searching for sales comps for domain name sales.

Adam Strong brought in domainer and developer Michael Sumner to assist with the new site, which includes more data sources and a better mobile browsing experience.

Domain names have also been split into 250 categories (underneath ten main categories), making it easy to find sales comps that don’t include the exact keyword in your domain name.

For example, this morning I clicked through to sports > baseball, and saw that InsideBaseball.com sold for $3,500 at the end of 2013. If I’m trying to sell a domain like HockeyToday.com (I don’t own it), neither “hockey” nor “today” would traditionally pull up InsideBaseball.com as a comp. Using the category browsing, you can find comps like this.

NameBio.com currently has $1.2 billion of domain name sales in its database.

Domain Name News has scored the domain DNN.com. But there’s a story behind the domain.

Last week domain news site Domain Name News announced that it had acquired the domain name DNN.com for use with its web site. This is a great domain and the team at DNN deserves a tip of the hat.

Earlier today I was reviewing UDRP decisions and came across a three character domain decision found in favor of the respondent. As I read the case, it hit me: this is the domain DNN.com, which Adam Strong and DNN now owns.

A bit of research shows that DNN.com was previously owned by media behemoth Knight Ridder. In early 2008, NameBubble, LLC bought the domain name for $14,000.

In April 2008, DotNetNuke Corporation filed a UDRP to try to get the domain name DNN.com. The company claimed that NameBubble had offered to sell the domain to it; NameBubble says it contacted DotNetNuke only when a related company offered to lease the domain and to ensure that it didn’t create a trademark conflict.

On the company blog, DotNetNuke’s Shaun Walker wrote about the UDRP filing back in June:

Research revealed that the dnn.com domain name had somehow changed hands in January 2008, and was currently in the possession of a domain name squatter. The squatter requested an outrageous sum of money for the domain name, and I responded that DNN Corp did not have the financial resources to entertain such a demand. The squatter indicated that another party in our ecosystem had expressed interest in the domain name, and it soon became apparent that he was attempting to leverage one party against another in order to try and generate the maximum profit.

Of course, very few people think of DotNetNuke when they hear the term “DNN”. In fact, the first thing I think about is DomainNameNews.com. It’s great to know that a company that understood the value of the “outrageous sum of money” it would cost to buy the domain ended up with it.

Leave it to domainers to go hog wild on April Fools’ Day. I promise not to pull any April Fools jokes at Domain Name Wire, but here are a few “stories” you may read about elsewhere…

DomainTools announced a new tool that predicts which typosquatters will register certain domains before they do, allowing lawyers to sue them in advance. Isn’t there a Tom Cruise movie about seeing crimes before they happen?

Rebel.com wants to be like GoDaddy, and announced a new “sexy spokesperson” today. The company says “As the domain industry gets more media recognition, Rebel.com has updated its image to mirror the allure of domain registration. The new Rebel.com spokesmodel is edgy, innovative, fun, and sexy — all qualities we identify with at Rebel.com.” Here’s a picture of the new “sexy spokesperson”:

California is going after Canada’s .ca extension, reports Adam Strong. (All joking aside, Canada did consider opening up the domain to registrants in California as a way to generate cash, but it took the high road instead.)

ICANN is dropping the last ‘n’. Apparently it’s going to Auction it off.

There’s a new domain conference in the works called T.R.A.G.I.C. It will showcase women in the industry. All 5 of them.