Buyers can now search by SEO and Google metrics.

Domain name marketplace Sedo has improved the searchability of expiring domain inventory and given it its own home: expiringdomains.sedo.com.

It’s a big improvement and it’s good to see Sedo improve discoverability of these names. It’s still a far cry from what you can get through a service like ExpiredDomains.net, but Sedo’s expired domain feed is not integrated with that service right now.

Sedo’s expired domain inventory comes from 1&1, a registrar under the same corporate umbrella as Sedo. Bids start at $79.

Download lists to look for good domains, and you now have longer to buy discounted domains at Name.com. 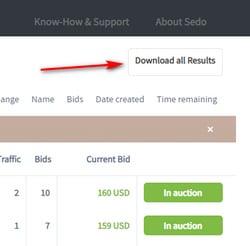 Sedo made its expired domain name inventory list downloadable. The marketplace auctions off expiring domain names from registrar 1&1 which is part of the same company as Sedo. But sorting through the list to find good domains is difficult. Now you can download the list and run it through services like Estibot to find the best domains. I also hope this means that expired domain data sites like ExpiredDomains.net start to provide data on these domains.

Also, Name.com has ended its Happy Hour sale concept in favor of monthly specials. The Name.com Happy Hour was a special promo (usually on one top level domain) that ran for a short time on Thursday afternoons. It’s a lot of effort to schedule time to register a domain to save a few bucks. Now, Name.com has a week-long sale each month. The kicker is you need to go to the sale page and get the discount code to get the discount. You’ll pay more if you try to register one of the sale domains and don’t use the discount code.

ICANN has published the latest official .com transactions report from Verisign, which includes data by registrar for March 2017.

The top registrars in terms of new registrations saw little movement. HiChina and PublicDomainRegistry swapped places but there were no new entrants:

Here are the top five registrars (open to the public) for net inbound transfers during the month:

On the flip side, these five registrars saw the biggest net outflow of .com domain names due to transfers:

At long last, two companies that are part of the same group strike a deal.

I say finally because both 1&1 and Sedo are part of the same parent company, United Internet. One of the greatest mysteries to me in the domain-company-politics arena since I started covering the domain name business was why these two couldn’t get a partnership going.

Now they have a deal, and this should be a big boost for Sedo and its MLS program. Not only is 1&1 huge (nearly 17 million customers) but it’s also focused more on helping people get a website than selling them a domain name. In other words, end users.

Domainers that list their domains in SedoMLS will now have their listings syndicated to 1&1 searches. This should provide a nice sales lift.

United Internet, a group of companies that includes 1&1, Sedo, InterNetX, and United Domains, appears to be taking a good chunk of the new TLDs market share away from GoDaddy.

United spent about $50 million advertising pre-registrations for new top level domain names. Yet GoDaddy was kicking its butt in registrations for the first batches of new TLDs that hit the market.

That has shifted in recent weeks.

nTLDstats.com has released updated numbers for the latest batch of Donuts domain names released today, and United led the way on each one.

*Only includes registrations under 1&1 and United-Domains.

These numbers don’t include all of United’s brands, just the ones advertised most heavily for pre-registrations.

You’ll note that 1&1 beat GoDaddy on two of the five, and when you add United-Domains it won each match up except .builders.

I’ve noticed similar numbers from other launches in recent weeks.

A number of things could be going on here.

1. United has improved its technology for getting domain names when there’s competition. Pre-registrations are essentially like drop catching.

2. 1&1’s cut rate pricing is attracting customers from GoDaddy. 1&1 is offering the first year at about half of GoDaddy’s prices.

When you look at overall market share of new TLDs, GoDaddy is down to about 30%. 1&1 and United-Domains each have about 10%.

GoDaddy’s overall numbers weren’t helped by sitting on the sidelines for .Berlin, which is the second most registered new TLD so far. (1&1, on the other hand, gave .berlin registrations for free for a year to local customers.)

What do you think has caused this shift?

[Editor’s note: this story has been updated with a new chart and comparison based on nTLDstats’ revised numbers for the first day.]