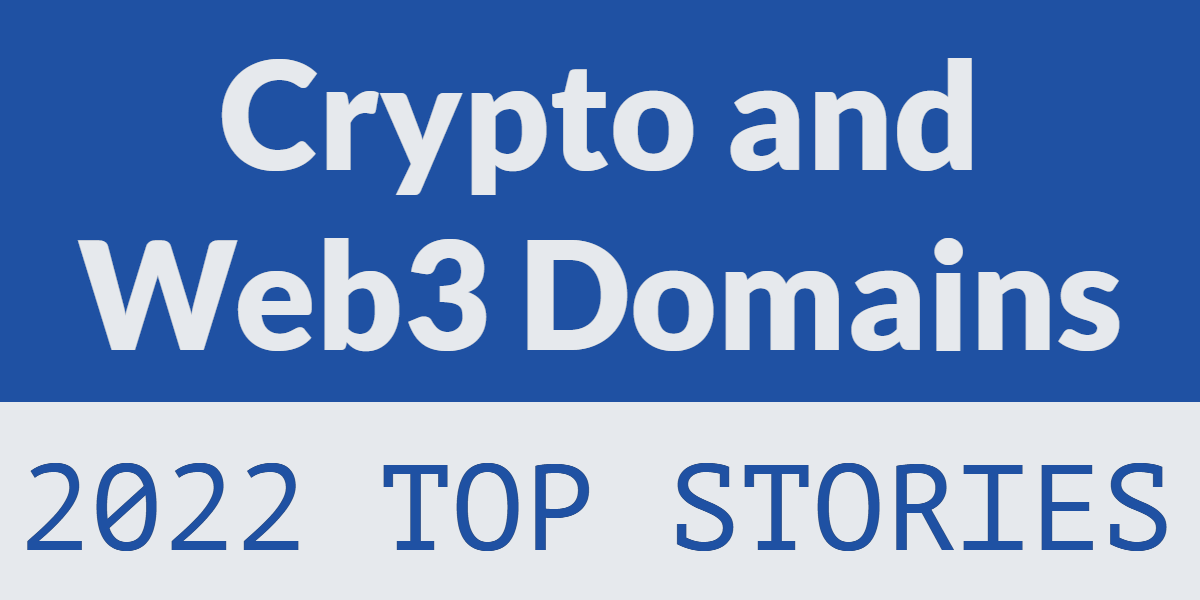 A big story this year was the rise and fall of web3 and a surge of interest in so-called web3 domain names.

We all know the story on the cryptocurrency front: values surged this year, and interest in NFTs boomed. Then it all came crashing down.

The other interesting side of web3 this year directly involved domain names.

Companies pitching blockchain-based domains have been around for years, but they started to make waves this year. One reason was the runup in NFTs and many NFT fans deciding to pile into Ethereum Name Service names that end in .eth.

Another reason these domains captured our attention was squabbling between competing web3 domain initiatives.

This came to a head when Unstoppable Domains, a VC-backed web3 domain company, filed a lawsuit over .wallet. It is frustrated that there’s a .wallet domain on Handshake, a competing system that lets anyone create a top level domain.

The lawsuit resulted in Gateway, a sort of registry/registrar player for Handshake, abruptly shutting down. People who registered second level domains through Gateway could no longer use them.

This irked Handshake fans. Namecheap, which sells Handshake domains and owns Handshake tech provider Namebase, decided to fund a legal battle on behalf of the owner of .wallet in Handshake.

During NamesCon in September, Handshake supporters publicly battled with one of Unstoppable Domains’ founders on stage.

Unstoppable Domains believes the first entity to publicly market an alt-root top level domain should get exclusive rights to it. It even went so far as to nuke one of its own domains, .coin, to prove its point. This was a surprising decision on many fronts, especially since it showed that second level Unstoppable Domains registrations are hardly unstoppable. .Coin owners are stuck with inoperable domains after Unstoppable turned off resolution services for the domain.

While web3 domain initiative backers bicker among themselves, “real” domain owners should take notice. It’s clear that Unstoppable has its sights on the next round of ICANN-approved TLDs, and it likely doesn’t want to pay full fare for them. It formed the Web3 Domain Alliance to advocate for trademark protection for top level domains.

There was one more interesting connection between web3 and domain names this year.

The domain eth.link expired and was auctioned at Dynadot for $852,000. This domain was important to the Ethereum Name Service community because its registrant set it up as a resolver service for .eth domains. You could type a .eth domain in at the third level, and it would resolve to the website for it without using a browser plugin.

But the guy who registered the domain was in prison for helping North Korea learn how to evade sanctions with cryptocurrencies, so he could not renew the domain.

He later teamed up with Ethereum Name Service to sue GoDaddy (the parent company of Uniregistry, where the domain was registered), Dynadot, and the entity that bought the domain at auction. A judge issued a temporary order transferring the domain back to him, and the lawsuit is ongoing.

Blockchain domains and the big challenges they face

How the web3 fallout impacts the domain aftermarket