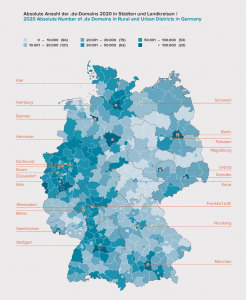 DENIC, the organization that manages Germany’s .de country code domain, has released detailed statistics about the namespace as of the end of 2020.

Each year, the organization analyzes which cities and regions of Germany account for most registrations.

Osnabruck has the most registrations per capita, with 1,563 .de domains per 1,000 in habitants.

Interest outside of Germany remains high, too. Domains registered to foreigners increased from 1.32 million to 1.45 million during the year. The United States accounts for about a quarter of those domains.