A top story this year was the sale of .org falling through. 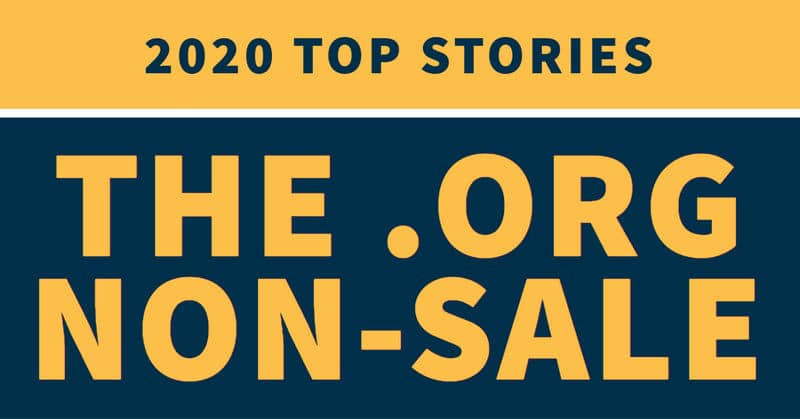 This is the third in a series of posts about the domain name industry in 2020. Read the others here.

One of my predictions for 2020 was that Ethos Capital’s deal to acquire Public Interest Registry would go through despite widespread outrage. I was wrong.

Ethos Capital and Public Interest Registry (PIR), which operates .org, announced the deal in November 2019. Ethos Capital agreed to buy the non-profit for $1.135 billion with plans to turn it into a for-profit venture.

Internet Society controls PIR and generates substantially all of its funds through the sale of .org domain names. It viewed this as an opportunity to exchange future cash flows from domains for one lump sump, derisking potential negative changes to the market for .org domains.

I remember receiving a call the day the deal was announced. The caller asked, “Do you think Fadi Chehadé is behind this deal?”

My initial reaction was no. Chehadé, the former CEO of ICANN, made a splash in 2018 when he led a deal by Abry Partners to acquire top level domain company Donuts. But why would he try to buy .org through a different firm?

But the caller pointed out that Chehadé’s name was in Whois for the registration of a domain name related to Ethos Capital. It turns out this caller was right; Chehadé was involved.

It’s still unclear to me why Chehadé and Abry partner Erik Brooks left Abry ostensibly to pull off this deal. Did Abry not want to be connected to the controversy? Did Chehadé and Brooks just see a bigger opportunity?

There was lots of pushback against the deal. EFF was particularly active in opposition. Six lawmakers — including Democratic presidential hopeful Elizabeth Warren — urged ICANN to reject the deal.

Still, history suggested the deal would go through…

Until California’s Attorney General spoke up.

In his role as Attorney General, Xavier Becerra oversees non-profits in the state. ICANN is incorporated in ICANN.

Becerra’s initial letter delayed the deal. It appeared ICANN was ready to approve the transaction in April but scuttled the approval when Becerra sent a more forceful letter.

At the end of April, ICANN’s board of directors voted to reject the sale.

The non-profit community is breathing a sigh of relief. And ISOC will have to settle for about $70 million a year rather than a $1.135 billion lump sum.