From an innocuous beginning, Google has grown into a key competitor for retail domain name registrations. 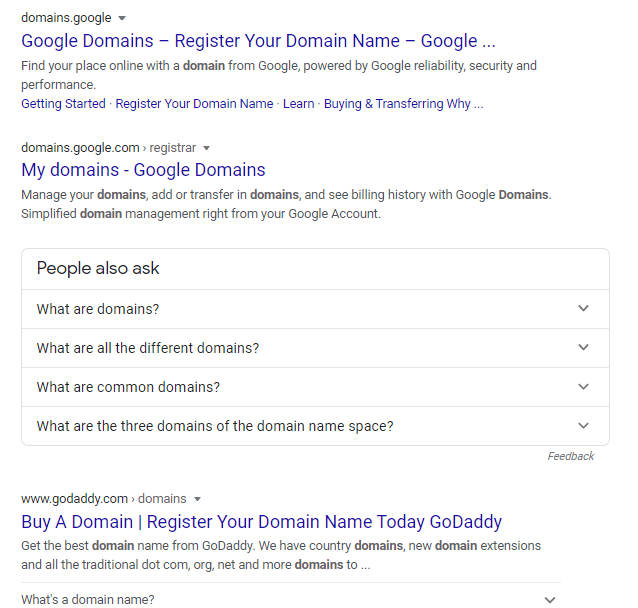 Google dominates the search results for ‘domains’ on Google.

I was in London in June 2014 at an ICANN meeting when the news broke: Google (NASDAQ: GOOGL) was becoming a domain name registrar.

Technically, Google had been a registrar for a long time. But it had never offered registrations to the public and instead partnered with other registrars to offer domains. Now it was going to sell directly to consumers.

As you can imagine, there was a lot of buzz at that ICANN meeting about Google’s entry into the market.

It wasn’t immediately clear what Google’s goal of entering the business was. This was the year new TLDs were rolling out, and I thought it might be connected to that. The message I was getting through backchannels was that this was another Google test venture. Throw spaghetti against the wall and see what sticks. After all, Google has tried and subsequently exited many businesses.

The markets were certainly concerned about the impact Google would have, though. Web.com’s stock was hammered on the news.

Google’s offering was, and still is, middle of the road.

Its pricing is simple and reasonable: $12 a year for .com, .net, or .org. It’s not the cheapest, but not expensive.

Its web interface is simple. That’s something customers appreciate, but it’s not unique to the domain industry.

So how did Google’s domain registrar, which is just middle-of-the-road, grow to siphon off so much from competitors?

I’d argue it’s all in the name.

As a former Google insider once told me, of course Google became a big registrar. If you’re searching for domain names and you’re sifting through registrars you’ve never heard of, but then see Google, of course you’ll choose the household name. You even have an account there already!

And Google had a great way to let people know that it offered domains. It started by advertising on Adwords…essentially taking cash out of one pocket and putting it in the other.

But shortly after Google launched Google Domains, the website at domains.google.com started to rank highly in search results. This seems at odds with everything Google says about search engine rankings. It’s on a subdomain, so it shouldn’t get link juice from the main Google.com domain. And Google certainly wasn’t an important site for domains at the time. Yet, it ranked well very quickly.

So people search on Google for domain names. The first result is a company they already know and already have an account with.

That’s pretty compelling, and it’s no surprise that Google is now one of the top 10 domain name registrars.