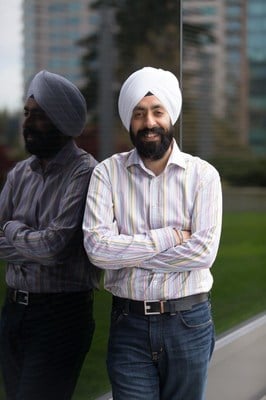 GoDaddy’s (NYSE: GDDY) new CEO, Aman Bhutani, is giving a keynote presentation at NamesCon in Austin, Texas this afternoon. This is a live blog.

The presentation is called Sushi, Onions and Domain Investors.

Bhutani said that in the past, they looked at people like those in the room at NamesCon as suppliers…suppliers of domains to sell to GoDaddy customers. Now he wants the company to treat domain investors as customers.

The presentation started with a video of Peter Askew, including video taken on an onion farm. He runs VidaliaOnions.com.

He then featured Shane Cultra. He used him as an example of people with dual identities: he runs a nursery but also is a domain investor. He pointed out that lots of people in the room are like that. Then he featured Alvin Brown, who talked about how he wants to leave some of his domains to his kids and grandkids.

Bhutani shared his philosophy: Transparency. Use that to raise Awareness. Act on the awareness in a Disciplined way.

GoDaddy is lining up more teams behind people like Paul Nicks and Bob Mountain to serve domain investors and help them grow their businesses. They are going to test, do more experimentation in the works they do with domain investors.

Examples: Improving mobile Investor app. Enhance the other side of the marketplace to give customers access to domainer inventory. If customers have ideas, they will test them and provide some of the data.

Another example will be sharing search data from the GoDaddy site, such as top keywords.

Bhutani then opened it up to questions. He had Paul Nicks, VP of Aftermarket, join him on stage to answer the questions.

In response to one question, Bhutani said that the company has moved from just promoting its brand to promoting the domain industry as a whole.