Joseph Peterson returns to write about NameJet. The Chinese market implosion and new expired domain deals have changed the face of NameJet since he last wrote. 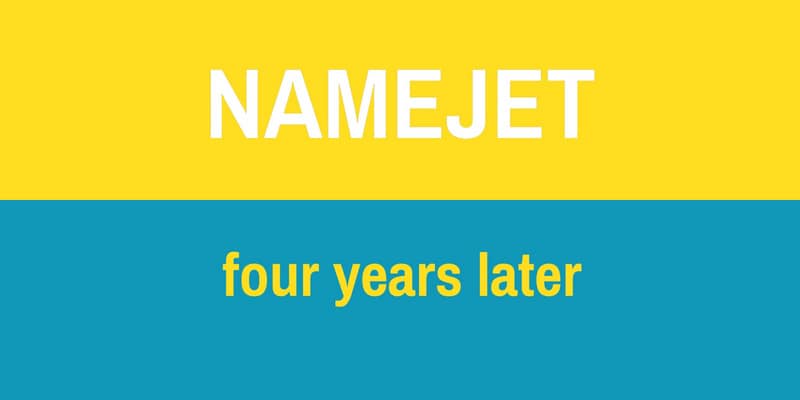 I stopped writing articles about domains at NameJet for DNW about 4 years ago.  “My how time flies!” would be one reaction.  But some things never change.  Or do they?  How has the domain market changed?

Rewind to January 2016, and we were looking at a record-breaking month for NameJet – technically a recap of December 2015.  Indeed, 2015 set and broke new records almost every month, as sale prices soared and transaction volume ballooned.  Chiefly this sudden growth occurred within a few categories of short domains prized by China, which were traded eagerly by speculators worldwide.  It was the year of the Chinese surge, as the graybeards will remember.  Prices were only going up, would always go up.  And if that market sector has deflated somewhat since, well, that may explain some of the gray beards.

Now we’re reviewing sales from December 2019.  What changes can we observe?  Let me reproduce this data from exactly 4 years ago:

As before, only sales above $2k are included in this analysis.  The vast majority of sales occur below that threshold.

Prior to 2015, it was very unusual for NameJet to see a month with more than 100 sales over $2k.  In fact, that happened only 11.6% of the time.  During 2015, however, such high-end sales volume became the norm, beginning in January with 148 domains, continuing through November with 233, and culminating in December with a staggering 383 domain sales.

And last month?  Only 68.  Even including an additional 14 sales from SnapNames over $2k, the total of 82 domains barely ties the average volume for NameJet alone during the years prior to 2015.  And compared to the Chinese surge, it’s a drastic drop-off.

Both in terms of sale price and transaction volume, therefore, NameJet in December 2019 is a pale shadow of its 2015 glory.  But how should we interpret that fact?  Here, for the sake of argument, are 3 hypotheses:

As contributing factors, any or all of those explanations might be true.  But which and to what extent?

Take a look at the average sale price.  Prior to 2015, the mean was $5435.  During 2015, it climbed to $7220, whether as a result of increased valuations or extra bidder competition or even due to the presence of certain kinds of premium domain inventory among NameJet auctions (which might no longer be offered to NameJet buyers with the same regularity).

So what was the mean sale price last month at NameJet?  $4670.  Unquestionably it’s lower – not just lower than 2015 levels but also down 14% compared to the multi-year average from years prior to 2015, which includes even the lowest-performing years of NameJet’s infancy.  If the overall domain market is appreciating AND there has been no decline in bidder activity at NameJet AND the same quantity of quality domains is being offered via NameJet, then we would expect this average sale price to increase faster than inflation.  But it has not.  Whereas the NASDAQ doubled during the past 5 years, and the Dow Jones Industrial Average nearly did so, the average price of high-end NameJet sales seems to have fallen.  Crucially, this is measured against levels prior to the Chinese surge.

Median sale prices show neither decline nor growth.  Last month, the median was $3200, which is pretty much identical to the pre-2015 average of $3075 and also to the average throughout 2015, which remained $3229.  In other words, exactly half of NameJet sales over $2k fall within the range of $2k to $3.2k with the other half above $3.2k.  This was true yesterday, and it remains true today.  If our data included sales below $2k too, then we could probably extract more useful conclusions from the median.

Last month, NameJet scored a much more modest $317.6k.  Is that good, bad, or normal?  What I can say is this: Of the 70 months that happen to be represented in my database, which begin with June 2011 and run through March 2017, last month only outperformed 11 and was beaten by the other 59.  Therefore, even if we exclude the entirety of the Chinese surge during 2015, December 2019 would rank well below average – somewhere between the 15th and 19th percentile for that 6-year period.

From nearly $3 million in December 2015 to just over $300k last December – that’s a precipitous 90% drop-off!  On the other hand, it’s what we’d expect to see if the Chinese-style inventory at NameJet were to disappear altogether.  Quoting my article from 4 years ago:

By my estimate, as many as 328 of these [383] auctions can be credited to China … That would leave only 55 domains that were obviously non-Chinese. … [So] it seems that Chinese-style domains contributed 85.6% by count, 88.8% by revenue.

Remember, last month had 68 sales above $2k.  Of those, how many could be classified as fitting a Chinese-style category?  Well, there were 18 domains of 2, 3, or 4 characters.  Longer numerical domains did not appear.  And of the 18 short domains, 5 were pronounceable 4-letter .COMs, which I’d classify rather as western-style brandables.  That would leave 68 – 13 = 55 domains that are obviously of non-Chinese interest.

It’s surprising that the number of non-Chinese domain sales at NameJet turns out to be exactly the same in December 2019 as it was in December 2015.  Domains from the Chinese market sector have mostly disappeared from the NameJet charts, whereas other domains show up in the same quantity as 4 years ago.

Is that expected or unexpected?  If we think of there being two separate but overlapping domain markets – one for China and one for the west – then one has shrunk or slowed or depreciated or moved elsewhere, while the other remains as it was.  Domains in non-Chinese categories are still being sold as before.  What’s significant, however, is that spending on Chinese-style inventory – by people inside China and outside – has not been redirected to western domain categories.  Wherever the extra volume of investment / bidding from 2015 has gone, it definitely has not gone into other domain sales over $2k at NameJet.

It’s hard to disregard so many indicators of decline.  Yet we should be wary of simple explanations.  Let me stress the limitations of this analysis.  NameJet is only one marketplace – not the domain market as a whole.  Moreover, it is a particular kind of marketplace – an auction platform that mixes expired domain inventory and owner-listed items.  NameJet has lost much of its expired domain inventory, including the valuable Enom inventory, to GoDaddy Auctions. A large fraction of premium domains, which can fetch prices above $2k, are drawn from non-expired portfolios.  Insofar as owners choose to list their premium domains elsewhere – perhaps at Sedo or with brokers – that can cause a decline in high-end sales at NameJet.  Of course, December 2019 might be only a fluke – a weak month flanked by more robust sales before and after.  Is that so?  We shall see in articles to come.

Joseph Peterson wrote over 140 articles for DNW between 2013 and 2017, followed by 2 years as Epik’s Director of Operations.  He is currently developing a marketplace for shared ownership of domains.