Kassey Lee provide an overview of domain extension use in China.

In my previous article Chinese domain market – the big picture, I highlighted the overall demand and supply of domains in China and concluded that there is great potential in this market. Now, I want to dig deeper and look at several important domain extensions. Let’s start with .cn. This analysis is based on data I have collected from China Internet Network Information Center reports published since 1997. 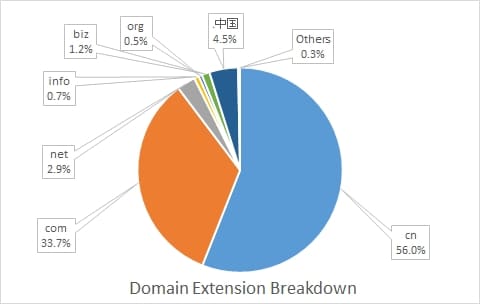 The chart shows a breakdown of domains registered in China as of December, 2018. As you can see, .cn captures the largest share: 56.0% or 21 million domains. This leading position has remained unchanged since 2007, so .cn will likely continue to be the largest domain extension in China for the foreseeable future. However, number does not equal value. Even though .cn has the number, corporations in China actually prefer .com and are willing to pay high prices for .com domains. (I’ll talk about it in the next article.) 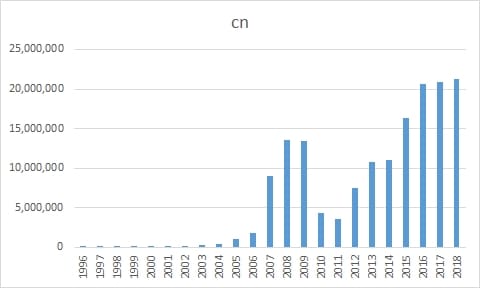 The chart shows that registrations grew very slowly in the early years. Some likely reasons are late awareness of the internet in China, registration restricted to corporations only, complicated registration requirements, and simply bureaucracy. Note that .cn was released in 1990 while major country extensions such as .uk, .de, and .jp, were launched in 1985/86.

In the early days, only subdomains of certain types were available for registration, such as com.cn, net.cn, org.cn, gov.cn, and edu.cn. Subdomains on com.cn became the dominant category. In 2003, the rules changed and second level domains (e.g. Baidu.cn) could also be registered in addition to subdomains (e.g. Baidu.com.cn). Then, registration was opened to individuals, and investors outside China could also participate.

This culminated in a great boom in 2007 when lots of investors flocked in, lured by aggressive pricing of $1 or even less in registration fees. However, the boom came to an abrupt stop when the rules changed. In 2010, the Chinese government started requiring owners of .cn domains to submit their identification information such as photo
and ID. This upset a lot of investors, particularly those outside China. As a result, they simply let their domains expire.

The .cn market recovered two years later when domain owners became used to the new rules. This was further helped by China’s growing economy with startups springing up everywhere. In 2013, .cn registrations doubled. Since then, growth has remained on the up trend. 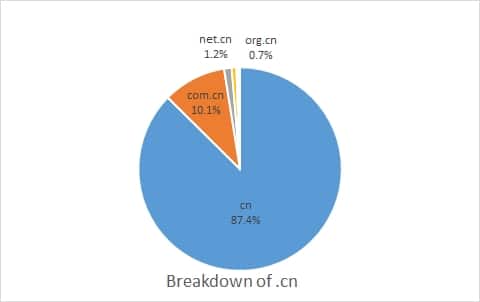 China differs from many countries such as the United Kingdom and Japan where subdomains on co.uk and co.jp, respectively, are the standard. In China, subdomains account for only a small number. For example, using data for 2018, you can see .cn captures 87.4% while com.cn secures only 10.1%, net.cn 1.2%, and org.cn 0.7%. The remaining adm.cn, gov.cn, ac.cn, and edu.cn all together take up less than 1%. In other words, Chinese prefer one dot (e.g. Baidu.cn). This will help moving toward a global domain naming style of just one dot to make it easier for consumers to remember.

In summary, .cn is No.1 in terms of volume in China. If you want to invest in .cn domains, remember 3 things: (1) be aware of the ID requirements, (2) pay attention to any rule change made by the Chinese government, and (3) remember the one-dot preference.