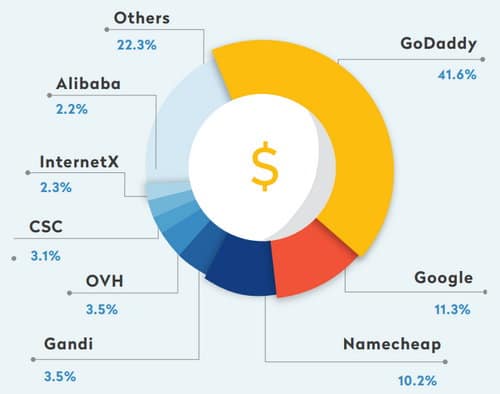 Domain name registry Radix pulled in $1.36 million in premium revenue during the first half of 2019, almost the exact same amount it generated in the second half of last year.

$0.52 million of that was from the registration of 619 new premium domains and the rest was renewal revenue.

More than half of the new registration revenue came from .online and .tech. Looking at renewals, .store and .online are the top revenue producers.

GoDaddy leads the way for premium domains of Radix domains, but I’m a bit surprised that Google is #2. Namecheap, which is the second largest registrar for new TLD registrations overall, comes in at #3.

The average premium revenue per domain is about $1,000, but new premium registrations this year have a lower average than renewals.

54% of premium domains that came up for their first renewal this year were renewed and 78% of second-year or later premiums were renewed.

Radix operates nine new top level domain names plus the .pw namespace. I just recorded a podcast with Radix CEO Sandeep Ramchandani that will air within the next couple of weeks.