[Editor’s note: This is a sponsored post by Lori Anne Wardi of Neustar]

Hi, my name is Lori Anne Wardi and I’m a domain junkie.

I’ve been buying, selling, studying, developing, dreaming about, promoting and preaching the bible of domain names since 2000. With many years as a domain investor under my belt, I got the opportunity to join the founding team of .CO Internet in 2009 as the Director of Marketing. From 2010 through today, it has been amazing to watch .CO grow from 28,000 domains under management to well over 2.2 million – and become the domain of choice for many of the world’s leading innovators, entrepreneurs and startups.

In 2014, when .CO Internet was acquired by Neustar, this born and bred New Yorker was given the chance to serve as the General Manager for the launch of New York City’s .nyc domain.  Working with the Neustar team to help turn the greatest city brand in the world into the one of the greatest city TLDs in the world was beyond rewarding, amidst all of the excitement and novelty of the new gTLD program.

Launching a brand and building a community around a domain extension is the best kind of challenge – it pushes your creative and strategic brains at the same time and forces you to think outside the box. But not every domain extension has the luxury of starting with a blank slate. Let’s take the .US domain, for example.  With 17 years under its belt, it’s hardly a brand new, baby namespace. So exactly how does a teenage TLD, like .US, stand out in a marketplace with more than 1,000 shiny new competitors?

Keeping .US fresh after 17 years

I know that the topic of .US marketing has occasionally inspired some very, shall we say, “spirited” commentary by domain investors. I mean, I read all the domain blogs too!  I get it, and it’s for good reason. As investors, we want to know that the TLDs we invest in are being well managed and marketed, and are building an engaged, loyal customer base of end-users in today’s increasingly crowded and complex marketplace.

After 17 years as the .US Administrator, there are a host of different strategies and tactics that Neustar’s marketing team uses to keep .US fresh, relevant and in demand by end-users. I could rattle on about how we use things like programmatic advertising, paid search, influencer marketing, retargeting, content marketing, and the like. But don’t worry, I won’t bore you with all the gory details. My goal today is just to give you a quick flyover view of our approach to defining and engaging with the .US target market.

’Micro-targeting’: The many faces of .US

It is marketing 101 that you need to clearly define your target market for any product, service or brand. As the country code domain extension for the United States of America, our most obvious end-user target market is, you guessed it, American businesses, organizations and individuals.

While “Americans” are obviously a cornerstone of our marketing, if our marketing whizzes had just written “America” next to “target audience” and patted themselves on the back for a solid day’s work, I suspect our marketing campaigns would go over like a led balloon.  Luckily, that has not been the case.

Instead, our team has developed a ‘micro-targeting’ approach; essentially, breaking our audience down into niche segments that each have unique and interesting motivations for using .US domains – and then building creative, relevant campaigns for each of these groups.

Some of these groups are attracted to the national pride and patriotism of the .US domain, others we’ve reached by thinking laterally about the TLD and leaning into the use of the word “us” to build special campaigns to represent community, connection and relationships.

More than just registrations, the ultimate goal of our micro-targeting is to ensure that there is genuine, meaningful usage of the .US domain, which ultimately is one of the best barometers for domain registries in assessing the health and viability of any namespace. Here are just a few examples of the unique end-user target markets we engage with as part of the .US community.

Small businesses – Dream with .US

SMBs in the USA are the bread-and-butter for .US domains. More than just a domain, .US supports small and medium sized businesses with tools and resources to help business owners launch and manage their websites, including step-by-step guides on topics ranging from choosing a domain, to lead generation, to social media and SEO. To spread the .US message to SMBs, we participate in a variety of business focused tradeshows and events, and leverage popular promotional channels like podcast advertising, social media and search engine marketing, among other things. 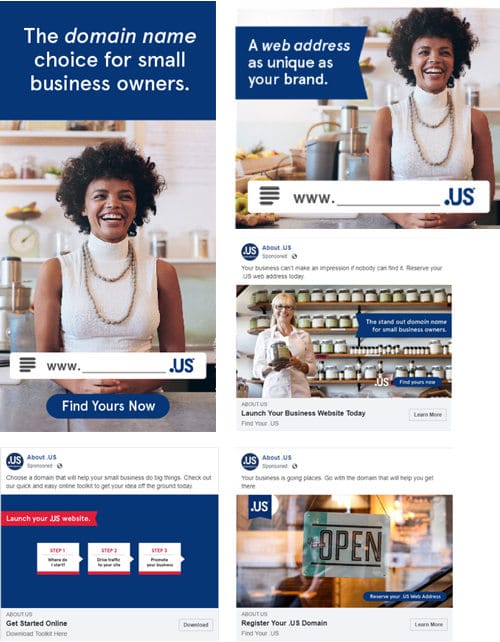 Political & civic engagement – Campaign with .US

Democrat or Republican, liberal or conservative, or everything in between, for political candidates, advocates and activists in the US of A, the .US domain is clearly a perfect match. Our “Campaign with .US” initiative helps these highly-engaged and passionate people and groups connect their cause(s) with their country through a .US domain.  Since there are so many options available for ad targeting based on job title, group association and user search history that indicates political involvement, we have the opportunity to be hyper focused in our approach and deliberate in our messaging. 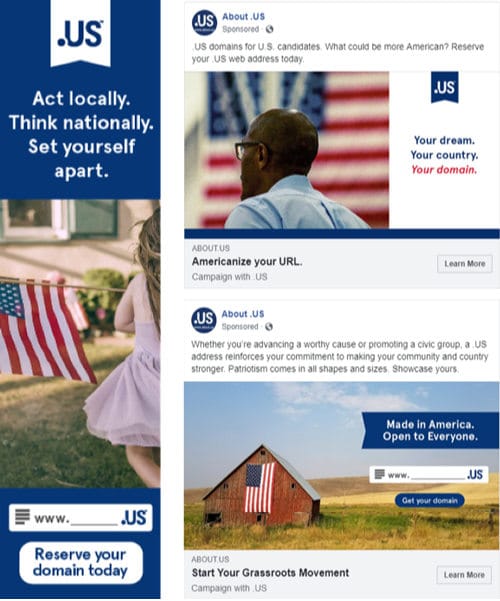 Engaged couples – This is .US

One example of how we have used the concept of “us” to market the .US domain is by tapping into the wedding website market. Our “This is .US” campaign encourages newly engaged couples in the United States to create their wedding website on a .US domain, and to grow their website as their relationship and family develops. There is a wealth of behavioral and interest targeting data available to identify those preparing for an upcoming wedding, so we can be sure to reach the right people at the right time with our message. 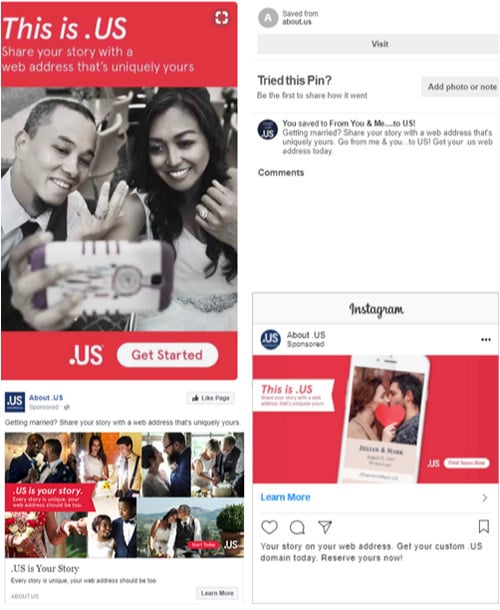 Families – Thankful for .US

Again, emphasizing the word ‘us’, our “Thankful for .US” campaign encourages American families to secure their personalized family web address on .US domain.  A family web address can be a place to share your family story or a platform to keep in touch with long-distance or extended family members whether through building a website or creating a family email group. There’s a strong case that family websites and emails are more personal, accessible and private than many popular social media sites, which let’s face it, are increasingly being criticized for harvesting our personal family data in sometimes mysterious (and often unwanted) ways. 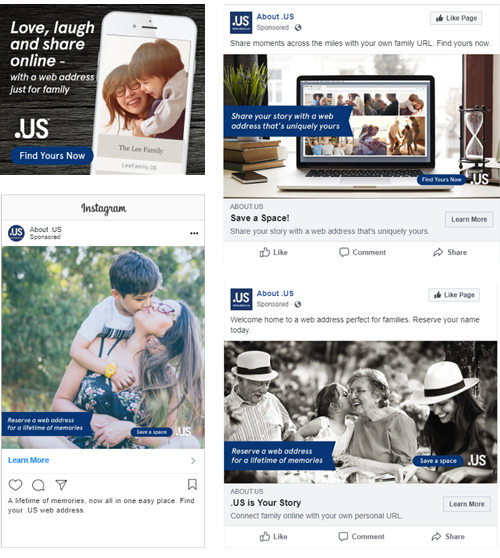 The Story of .US

At the end of the day, the best kind of marketing is the kind you don’t do yourself: word of mouth. Building a sense of community, ownership and loyalty around the .US domain enables us to let our satisfied customers tell their stories — promoting .US in the process.

Our recent “Story of .US” video campaign featured real .US customers from a wide array of backgrounds showcasing their businesses and brands – and explaining their affinity for the .US domain in their own words. From the multi-billion dollar tech behemoth Zoom.US, which just had the most successful IPO of 2019, to a group a high-schoolers who have started their own web development business — it’s extremely gratifying for us to see and hear real customers enthusiastically sharing their .US stories with the world.

Please take some time to watch some or all of the videos in “The Story of .US” campaign – you can find some of them below, or all of them on our website here.  We are extremely proud of this campaign and hope you find it inspiring too. 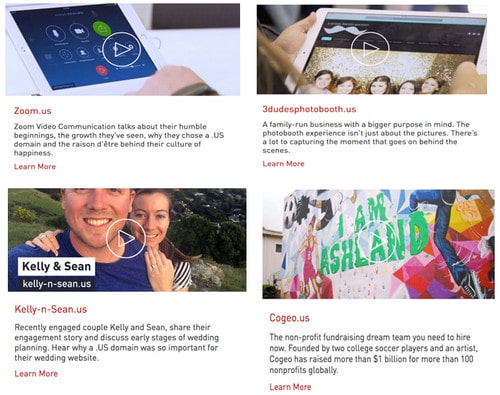 The next 17 years and beyond

It has been an honor for the Neustar team to launch, build, grow and shape the .US namespace, from inception to today. But we’ve never rested on our laurels and we certainly don’t plan to do so now. In the years ahead, we are committed to continue refining our marketing strategy, innovating on new and unique marketing campaigns, engaging our community of brand ambassadors and supporting ongoing growth and success of the .US TLD.

Ultimately our goal is to ensure that the millions of individuals, businesses, non-profit organizations, community groups, couples, families, startups, solopreneurs, veterans, dreamers, makers and more who are building their future on .US – as well as those who invest in the .US namespace – can rest assured knowing that .US is one of the most trusted, dynamic and in demand TLDs in the world.

If you know of any cool .US customers, or stumble upon any “in the wild” – please reach out and let us know.  We are always looking for new and interesting ways to shine the light on the great things happening in the .US namespace!  You can learn more about .US at www.about.us, and can contact us comms@registry.neustar.  Thanks for reading!