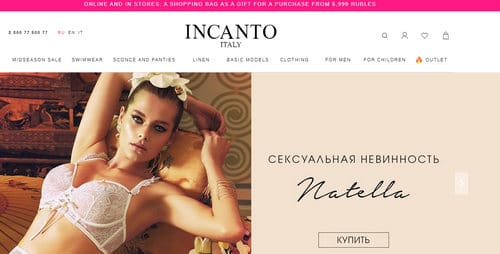 The company that operates this website at Incanto.eu was found to have filed a cybersquatting case in bad faith.

Brooksburnett Investments Ltd, which sells clothing under the Incanto brand, has been found to have committed reverse domain name hijacking in a dispute over the domain Icanto.com.

A three-person World Intellectual Property Organization panel did extra research to figure out if the Complainant was providing the entire truth. It decided that the Complainant didn’t show that the domain owner registered the domain in bad faith and didn’t prove that the owner lacked a legitimate interest in the domain.

Amusingly, the Complainant pointed to another UDRP filed against the domain owner as proof that he was a cybersquatter–but the panel in that case found in the domain owner’s favor.

The Complainant’s first Supplemental Filing acknowledges that the “Complainant began to optimize the business recently, began to increase the efficiency of assets. The Complainant has plans for the US market, so drew attention to the problem of respective domain names and filed this Complaint.” This does seem to be a “Plan B” filing, after the Complainant recently tried without success to purchase the Domain Name from the Respondent some 16 years after the Respondent added the Domain Name to his portfolio. The Complaint made sweeping assertions about the Complainant’s business and trademark rights and recognition that simply did not match the facts in 2003 when the Domain Name was registered and offered little or no evidence to support its claims for the “worldwide” fame of the trademarks in 2003. It required two rounds of Supplemental Filings and additional research in public record sources for the Panel to reconstruct the circumstances in 2003. The Complaint was factually misleading and had little prospect of establishing bad faith in particular, given the very limited and localized use of the mark in 2003 by the Complainant’s predecessor in interest and the generic meaning of the term “incanto”. The Complainant contended repeatedly, with no basis, that this was a “coined” term associated distinctly with the Complainant. Arguing the Respondent’s “pattern” of bad faith based on a UDRP decision that actually found in favor of the Respondent is simply one more example of the egregious overreaching in the Complainant’s approach to this proceeding.