A look back at the domain name industry ten years ago this month. 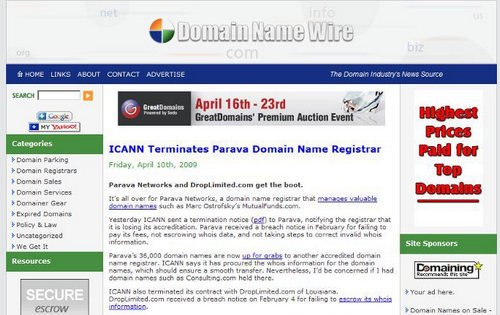 The domain name industry has changed a lot over time. This morning I looked back at what was going on this month ten years ago in April 2009.

That month I launched a new site design (pictured). Back then I took videos with a Flip Camera. And I thought nothing of flying to Vegas to party with other domainers. (OK, I’d still do that but it was easier when I was ten years younger.)

I wrote 100 posts that April. It’s a snapshot into what the domain industry was like back then. Here are some of the stories…

Parking was important back then but revenue was falling. Remember when Parked acquired WhyPark? This will bring back memories of mini sites, too. Sedo picked up RevenueDirect a couple of months before. Frank Schilling’s Name Administration was trying to court direct advertisers for its domains.

GeoDomains were also hot back then. Remember the GeoDomain Expo?

A company called Live Current was selling some of its great domain names including Vietnam.com and Body.com for $400,000 each.

Sedo launched SedoMLS, enabling registrars to offer aftermarket inventory on their sites. Afternic’s DLS launched a couple of years before that.

We were harping for bigger “for sale” notices on parked domains. It took a while for this to happen.

That was also the month Susan Boyle became an overnight sensation (see video below). When she went viral so did the website at SusanBoyle.com. But the singer didn’t own it.