Roll-up’s numbers slip as it simplifies its business. 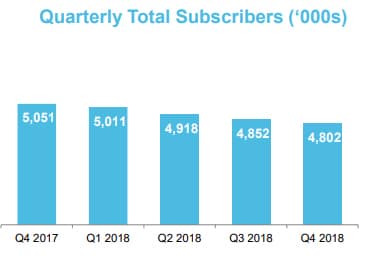 Endurance’s subscriber base continues to drop.

Revenue, adjusted EBITDA and subscriber numbers were all down quarter-over-quarter and year-over-year.

The drop was expected. Revenue was in line with the company’s expectations for the year and adjusted EBITDA topped forecasts. It’s all part of the company’s reckoning of a roll-up that became unwieldy.

Endurance rolled up much of the shared hosting market, acquired domain name companies and bought email marketing platform Constant Contact. It was a lot to chew on. Now the company is focusing on core brands and simplifying the business.

On the domain name side, the company is focusing on the Domain.com brand as well as BuyDomains and ResellerClub (which came with the Directi acquisition). Endurance is the third largest domain name registrar in terms of .com domains under management.

Domain revenue and customers fell slightly in 2018 although adjusted EBITDA flipped from negative to positive.

Its web presence business includes BlueHost and HostGator. Numbers were down across the board in 2018 in its hosting business although average revenue per subscriber ticked up slightly.