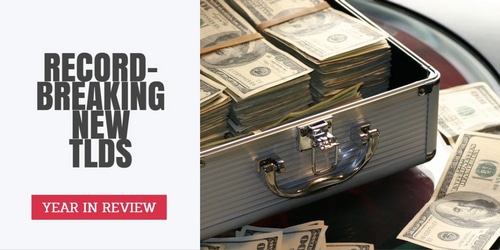 Big dollar sales of new top level domain names are rare, but Donuts announced three blockbuster deals in 2018–each clipping the prior record by a small amount.

First, Donuts announced that Home.Loans sold for $500,000 to a Florida entrepreneur. Blake Janover had success with other new top level domains before plunking down a half million dollars for this one. (Listen to a podcast with Blake here.)

Then a Missouri entrepreneur bested that sale by paying $500,300 for Vacation.Rentals. The extra $300 was not random. Mike Kugler wanted the press that came with being the record holder. (Listen to a podcast with Mike here.)

That record lasted until November, when Domain Name Wire broke the news that Donuts sold Online.Casino for $510,000.

The home.loans and vacation.rentals buyers both cited perceived search engine optimization benefits as a key reason for paying so much money. At the time of writing, both are on the first page of Google for the search term matching the second and top level portions of their domains, e.g. home loans and vacation rentals.