Registrar tells the controversial social network to take a hike. 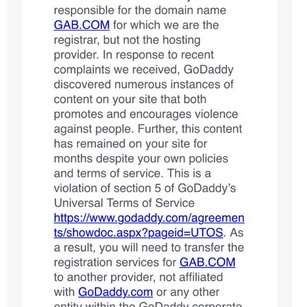 A notice that Gab.com says it received from GoDaddy.

Domain name registrar GoDaddy (NYSE:GDDY) has informed Gab.com that it needs to move its domain name to a different company. This is according to a tweet from the controversial social network, which posted the email notice from GoDaddy (pictured).

Gab.com has come under fire after it surfaced that the Pittsburgh synagogue shooter was active on the site. The social network is known for letting anything be published and has become popular with racists and for hate speech.

Other companies pulling the plug on Gab.com include PayPal, Stripe and its hosting providers.

GoDaddy tries to avoid suspending service to domains due to the content on them but has made exceptions. Last year it told the operator of the white supremacist site Daily Stormer to switch registrars after the Charlottesville rally. The registrar said the site was inciting violence, which is against its terms of service.

The operators of Daily Stormer and Gab are actually fortunate that GoDaddy merely asked them to switch providers. When DailyStormer.com moved to Google, the company went a step further by suspending and locking the domain.

Gab.com was purchased for over $200,000 on Sedo. It appears that the social network then acquired the domain on Flippa for $220,000 last month. It had been using Gab.ai for its web address.