NameJet needs to make some changes to improve its results. 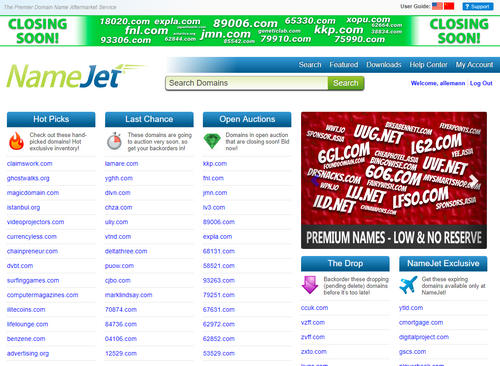 It’s been a rough year or so at domain marketplace NameJet.

First, there was the shill bidding scandal last summer.

Then, the company re-lost its Tucows expired inventory to rival GoDaddy. This is despite Tucows owning half of NameJet, so that wasn’t exactly a vote of confidence.

Those were big blows. NameJet is mostly left with Web.com’s registrars and Enom, plus pending-delete domain names and private seller inventory. A drop in the Chinese market is also hurting.

Last month, NameJet had $259,000 of sales over the $2,000 mark. It had $744,000 in the same month last year. That might have been an outlier because of a lot of three letter inventory, but I checked year-over-year sales for the past five months and they are all down except for August, which was essentially flat.

This could be somewhat of a death spiral. NameJet needs to reinvest in the business, but it also needs to make the case to its owners that it’s worth making the investment in light of lower revenue. I hope they choose to invest in the business because the industry needs at least two solid competitors for direct-transfer expired domains.

Here are some inexpensive ways that NameJet can improve its business.

NameJet might have beaten GoDaddy to the market with its app, but NameJet’s is inferior. It never alerts me when an auction is ending even though I have it set up for alerts. There also doesn’t seem to be a rhyme or reason to the ordering of domains in the app and it seems to reorder whenever you go back to the same screen.

Alerts are the only thing keeping me on top of auctions at GoDaddy, so this is a big deal. Because I usually forget about the auctions, it’s not worth my time to research domains at NameJet to backorder.

During one week last month, I had a dozen auctions. I would have bid higher than the closing price on at least four of them. I might not have won, but not getting alerts led directly to lost money for NameJet and its partners. And I’m just one small bidder. I would start bidding on NameJet again if it improved its app.

Remember activist investor J. Carlo Cannell and his gripes about former NameJet co-owner Rightside? While I don’t agree with everything he said, I agree with this:

The user interfaces at eNom and Namejet look and feel clumsy and stale. Looking past the main page of NAME’s sites, the logged-in front-end infrastructure is untouched and acts like time capsule to what existed half a decade ago.

Frankly, I don’t need an interface change. But the graphics NameJet uses to promote auctions do not instill confidence in the platform. A Snappa subscription should do the trick.

I think quite a few investors now filter out domains that have a reserve when searching on NameJet. The same inventory is listed over and over. NameJet should limit the number of times a seller can list the same domain with a reserve during the year. If they want to list it again, make them drop the reserve substantially.

Also, NameJet needs to continue to work on building up confidence in the integrity of its marketplace after the bidding scandal last year. People won’t bid if they don’t trust the system.

Most of these fixes are fairly easy and I believe they will lead to improved results on NameJet. Perhaps NameJet can win more partner inventory if its results improve.