Consumers pay over a half billion dollars more than necessary each year to register .com domains.

It’s the Department of Commerce, through the Cooperative Agreement, that effectively sets price controls on registrations and renewals .com. Verisign has a contract with ICANN for running the domain but the Cooperative Agreement can mandate price controls in the ICANN agreement. In the past, ICANN granted Verisign the ability to raise prices in .com. The DOC stepped in and froze the amount Verisign charges registrars at $7.85 per domain per year.

Verisign also has a presumptive right of renewal with ICANN for the .com contract. It got this right after negotiations with ICANN following a lawsuit. Unless Verisign really messes up, or if there’s an antitrust ruling, Verisign gets to run .com in perpetuity.

So in some ways, considering what the cost of .com would be if the contract was put out to bid is a pointless exercise. However, it’s relevant to the Department of Commerce and National Telecommunications and Information Administration (NTIA) as they consider what to do with the Cooperative Agreement.

Verisign’s business is effectively an exclusive contract to run .com. (While it also runs .net and a handful of other top level domains, its business is built on .com.) It has extremely high margins and these margins are akin to a tax on consumers around the world.

Let’s take a look at the margins.

Verisign is printing money. Every additional domain that is registered drops directly to the bottom line after paying ICANN 25 cents.

That’s why investors love the company. Even as the S&P 500 and tech sector valuations have skyrocketed, Verisign has outpaced them. 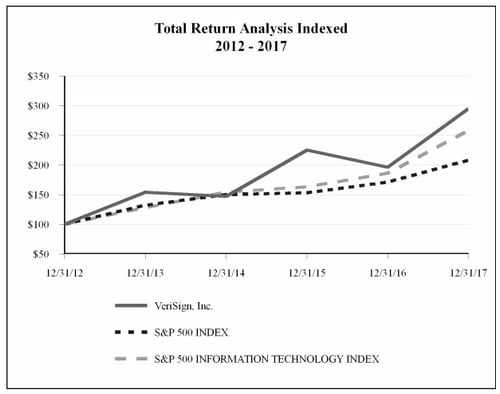 A chart of Verisign’s stock returns from the company’s 2017 annual report.

How much would a competitor bid to run .com? It would certainly be lower than $7.85.

Consider a recent bid to manage the registry for India’s .in domain name. According to MoneyControl, Neustar bid just 70 cents per domain. Its rival Afilias offered to run it for $1.65 per domain.

These are competent registry operators. Neustar runs .us, .biz and .co. Afilias runs .info and .au. These companies also manage the registries for hundreds of other top level domains.

While .com comes with challenges of scale, it also benefits from economies of scale.

Now, consider what the above-market contract with Verisign means for consumers. Let’s be generous and say that the best competent bid to run .com would be $3.50 per name. With 137 million .com domains currently registered, that means consumers across the globe are paying about $600 million in extra fees per year than necessary. That amount only grows if Verisign gets the right to increase prices.

That’s a big tax on the world’s consumers that exists primarily because the .com contract can’t be put out to bid. It’s not a market-price situation.

That’s where the Department of Commerce needs to step in. With the Cooperative Agreement, it is the only entity that can control the price of .com domain names. It should exercise this power.