A look at data behind ICANN’s growth and ensuing budget crunch.

ICANN is in a bit of a budget crunch. Lower than expected revenues along with a re-evaluation of the required reserve fund (and tapping into it) are straining the organization.

I have plenty of thoughts on how this happened and what to do about it, but I’m going to start with a series of charts showing the size of ICANN over the past 7-8 years.

Let’s start by looking at the non-profit’s expenses over the years.

Note that ICANN’s fiscal year ends in June. For example, its 2016 financial year ended June 2016, and data from that year was reported on its 2015 tax return.

This chart shows total expenses for FY 2009 to FY 2017. Data is taken from tax returns except for 2017, which is taken from audited financial statements. 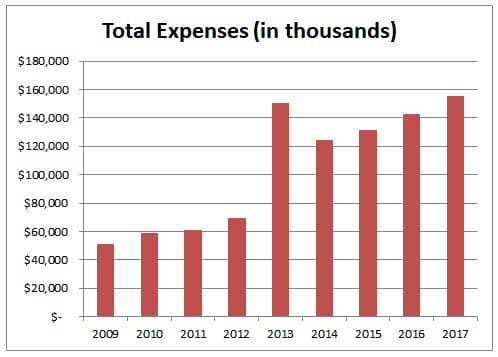 You’ll notice a huge jump in FY 2013 as ICANN scaled up to evaluate new top level domain name applications. This was a heavy-lifting year for ICANN. While ICANN’s expenses swelled from $70 million to $150 million, all but $7 million of the difference was attributed to new TLDs. (I’m counting operational new TLD costs and risk expenses, but not financial investment expenses.)

And this is where things get interesting. In the next year, FY 2014, ICANN’s allocated expenses for new TLDs dropped by $50 million but its overall expenses fell by only $26 million. 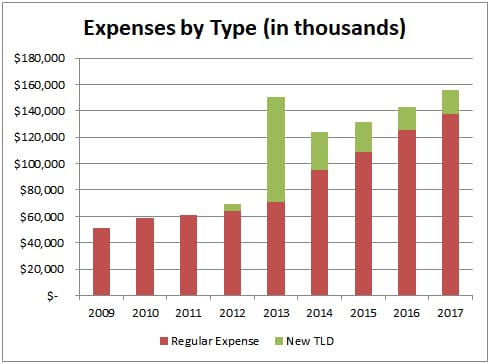 In my next post, we’ll look at headcount at the organization.