New option is a brainless way to optimize Adsense revenue.

It’s been well over a decade since the golden days of Google Adsense (for me, at least). There was a short period of time I was making more than a thousand dollars a day from Adsense on websites and a much longer time I was bringing in over a hundred dollars a day.

A lot has changed since then, not the least of which is that the made-for-Adsense sites I created barely receive any traffic anymore and I’ve let many of them expire.

Still, Google Adsense can be a great income source for sites that cannot sell advertising directly due to their size. I still have two sites that I haven’t touched in a decade that generate over $100 a month. Not bad considering I don’t have to work for it.

Today, Google announced Adsense Auto ads, a truly set-it-and-forget-it monetization option for websites. I think this will be an ideal ad monetization solution for creators of small sites. That includes domainers who create small sites on their domains.

While many people think they are experts at picking the right spots to maximize ad revenue, I’d put more faith in Google engineers to optimize Adsense income on a smaller site. It’s also nice to not have to optimize separately for mobile and desktop browsing.

Site owners still get to pick the ad types that will display. Other than that, everything is in Google’s hands.

A couple of years ago I started a financial site on which I (very) rarely publish. It doesn’t have any ads on it, so I decided to try out Auto ads on the site. You can take a look at UpMoney.com and see the image below.

The ad behavior isn’t optimal yet, probably due to the low site traffic. It appears that Google is making room for ads but not always delivering them. In the image below you will see two blank spots without ads and one with a correctly inserted ad. About a half hour after taking the screenshot, ads started showing in some of the white spaces but other white space was added.

I think the location selection is pretty good, but making blank space instead of ads is an issue. 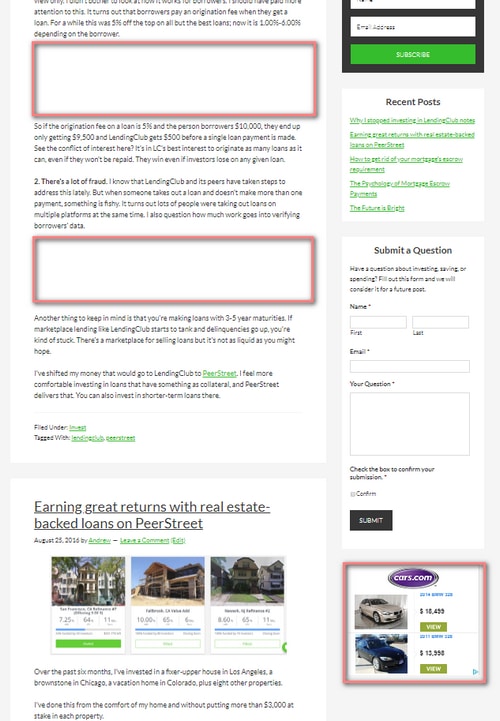