The domain name industry is on a downswing. What can change this? 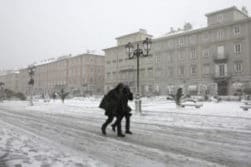 It’s cold out there.

Over the weekend I read a blog post by Danny Aerts, CEO of The Internet Foundation in Sweden. IIS is responsible for running Sweden’s .se country code domain name.

I think he does a good job summing up where the domain industry is right now:

Now, one doesn’t need to be especially gifted to guess what is about to happen in the domain industry. The market is mature and largely over-established. We see too much speculation, too many top-level domains, too many registries (that administer top-level domains), too many back-end providers (delivering systems for the administration of top-level domains) and apparently also too-many ICANN registrars.

This also means that much will decline in the future. We will see a decline in growth of domains in new top-level domains, in growth for .com after a large speculation wave in 2016, and in the number of registries. Growth in .se may also decline. We have received a lot of new registrations during the spring that probably will not be renewed.

I’ve been following the domain industry since the late 1990s and have been covering it for this blog since 2005. I’ve seen ups and downs, and I think Aerts does a fair job assessing where we are right now.

Sure, some businesses are doing fine…even great. Others are struggling. But as a whole, I think Aerts paints the right picture.

The domain business took a hit after the .com bust of 2000 but was strengthened by deregulation. It was then on a strong growth trajectory until the domain parking business waned. Even for companies that weren’t directly involved with parking, parking revenues were responsible for growing registrations (benefiting both registries and registrars) as well as the aftermarket. People that made lots of money from parking invested it in other areas of the domain business as well. But parking has been on a downswing for nearly ten years.

There was another upswing thanks to the rollout of new top level domains. New money came into the domain business and those that achieved earlier domain riches also invested heavily. Many of these bets were bad bets and there are few spoils left from that business.

Money from China helped a couple years ago. Frankly, it’s still helping even though it’s down a lot.

Yet it’s difficult to see any meaningful event or market change in the near future that will pump new excitement into the domain industry. But I’m looking hard for it.