Do the company’s naming rights plans expand beyond the Verizon Center? 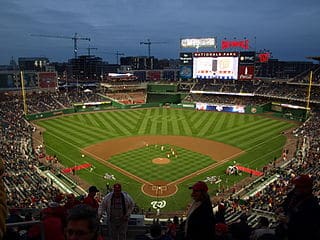 Is Capital One also considering buying naming rights to Nationals Park, or are its latest domain registrations just a defensive move? (Photo by William F. Yurasko from Alexandria (039) [CC BY 2.0], via Wikimedia Commons)

Earlier this week I broke the news that Capital One registered domain names suggesting it is buying the naming rights to what is now the Verizon Center in Washington DC.

Now the company has registered domain names suggesting it has grander plans for stadium naming in Washington, D.C. — but I caution that it could also just be part of a defensive domain registration strategy.

Here are the domains it registered:

It would be very bold to go after two naming rights deals in the same city, but you have to admit that it’s pretty clever for Capital One to sponsor sports complexes in the capital.

Naming rights to Nationals Park, where the MLB Nationals play, are apparently up for grabs. It could also be RFK stadium, where D.C. United of Major League Soccer play.

Again, these domain registrations could just be a defensive move on the part of Capital One after I broke the news about the arena naming. We’ll have to see.