Panelists should use common sense even when a domain owner doesn’t respond. 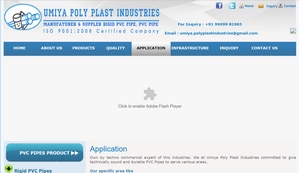 A PVC pipe maker in India is about to lose its domain name, and I bet it isn’t aware of it.

Why does Virgin want to shut down the website of a pipe maker in India?

That’s a great question. An even greater question is how a World Intellectual Property Organization panelist decided that the company in India was cybersquatting with the use of the domain name.

Virgin has trademarks in a number of fields, but I don’t believe PVC pipe is one of them.

Nonetheless, it filed a UDRP against the Indian company and the Indian company didn’t respond. The Whois for the domain is in the name of what appears to be a web developer. My guess is the PVC pipe maker isn’t aware of this dispute.

You can give a bit of leeway to a panelist for assuming the worst when someone doesn’t respond to a UDRP. But this case was so outlandish that I’m left scratching my head.

Virgin PVC is an industry term.

The fact that the Complainant has an extensive reputation for a series of marks comprising VIRGIN followed by a key word describing a business is likely to create the impression in the minds of Internet users that the website connected to the disputed domain name is in some way related to the Complainant or the Virgin Group.

Let me ask you something: If you saw a link for VirginPVCPipe.com, would you think it is associated with Richard Branson?

This line in the “Registered and used in bad faith section” also sets off alarm bells:

In view of the notoriety of the Complainant’s trademark, the Panel finds it plausible that the Respondent has registered and used the disputed domain name in an attempt to attract Internet users to its website for commercial gain, by creating a likelihood of confusion with the Complainant’s mark as to the source, sponsorship, affiliation or endorsement of the website or of the products presented on the website…

Plausible? Is that now the standard for bad faith in a UDRP?