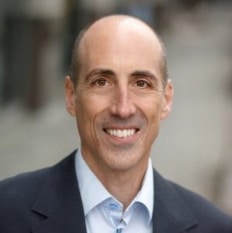 Paul Stahura has exited his role as CEO of new top level domain company Donuts, switching places with Bruce Jaffe, who was previously Executive Chairman of the company’s board.

Stahura (podcast) will be full-time Executive Chairman, working on thought leadership, Donuts Labs (finding new uses for domain names and DNS) and mergers and acquisitions. But he said it was time for him to move on and bring in someone with a different set of skills.

“Bruce is very articulate; I’m more of a startup person,” he said. He explained that he initially thought that Donuts would have 30 people. It’s now at 40 and might hit 50 this year. “It’s just not my forte.”

Jaffe said that replacing Stahura makes sense at this point in the company’s history.

“This is a natural evolution of the company,” Jaffe said. “Paul, as an entrepreneur, has founded and built companies and knows when it’s time to bring in a set of partners and managers to help scale the business and grow.”

Stahura said the company considered promoting one of the other three co-founders to the CEO position but decided against it.

Jaffe has been an independent board member for about a year but started to take on day-to-day responsibility at the company, working alongside Stahura.

“The founders have done a fantastic job of assembling a great portfolio of new TLDs,” Jaffe said. “My role is to help accelerate the growth, build the business, and team up the industry expertise that the founders bring with world class operators.”

One of those operators is John Pollard, who is joining as Chief Revenue Officer. Pollard will be responsible for sales & marketing, channel relationships, and other functions at the company. Donuts’ Chief Marketing Officer left last year and its Chicago office, which was responsible for marketing, shut down. One of Pollard’s responsibilities will be to rebuild the marketing function.

While there may be some overlap between Pollard’s role and that of co-founders Richard Tindal, Dan Schindler and Jon Nevett, the founders will all remain at the company.

“I wouldn’t have taken this job if any of the founders were leaving,” Pollard said.

For more on Donuts, read this profile.