URS is a faster, cheaper version of UDRP. A big difference is what happens when a Complainant wins. In the case of a URS, the domain name is merely suspended instead of being transferred to the complainant like it is in a UDRP.

This has always seemed a bit silly to me. A company pays money to suspend a domain name, only to have it expire and drop at a later date so anyone else can register it? (Perhaps I’m looking at it the wrong way since so many domain names won in UDRPs end up being let go at a later date.)

I analyzed the first 50 domain names that were suspended under URS at National Arbitration Forum to see what happened to them after they expired. 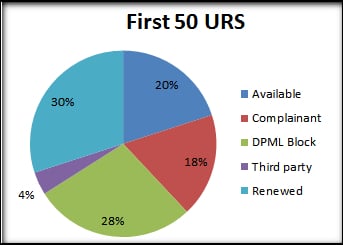 Let’s get the easy ones out of the way first.

Here’s where things get interesting. The most common thing that happened to these first 50 domains is that they were renewed. Twice. And they still show the original owner who lost the URS in Whois.

My reading of the URS is that suspended domain names remain suspended until the end of the current registration period. According to the URS rules, the complainant can then renew the domain name for one additional year by contacting the registry. (Yes, registry, not registrar. Who designed this policy?)

This means that domain names suspended over two years ago shouldn’t still be registered to the original registrant.

I reached out to several of the people who lost URS cases. One of them responded, and he told me that he hasn’t renewed the domain name. So I turned to registries and registrars to figure out what’s happening.

It seems that the way URS works doesn’t fit into any existing automated procedures. It’s manual and requires a lot of human intervention, including when it comes time for renewal/expiration. That human intervention can be a problem, especially when you’re talking about the uncommon case of URS suspensions.

In some cases, the domain name registrar might have overlooked a manual process, and in others the registry did.

Of course, the complainants in these cases still win if the domain gets renewed while it’s suspended. Their goal was merely to suspend the domain, not get ownership of it.