The maker of a popular app has branded it with a new TLD. 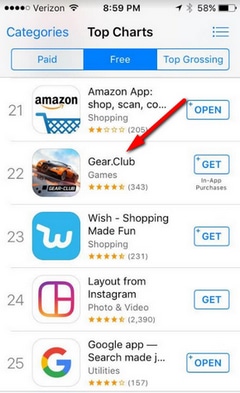 I was scrolling through the iTunes app store charts last night when something caught my eye: an app called Gear.club.

My first thought: A case of weird branding, or does this company actually own gear.club?

It’s the latter. The app maker bought gear.club as a registry premium in February for $5,691.66 and has branded its app to match the domain name.

The logo for gear.club shows a dot midway vertically between R and C, but the branding on its site calls it “Gear.Club”.

It looks like a pretty spiffy car racing game. Yesterday it was #10 on the iPad free list and, as you can see in the image, #22 on the iPhone free list.