Is .com’s growing base of registrations about to go negative?

Bidzos, the CEO of .com registry Verisign, was celebrating a better-than-expected third quarter last year. Domain name registrations were higher than normal thanks to emerging markets.

Bidzos and his leadership team thought the short-term boost was over. On an investor conference call, Bidzos said:

He predicted the company would add 1.1 million to 1.6 million .com and .net domain names to the base in Q4 2015 after deletions.

It ended up adding 4.6 million.

Like I said, Bidzos was wrong. Just in a good way.

The fourth quarter last year saw stunning growth in new domain name registrations as domain investors expanded their definition of what makes a domain name valuable. Four or five random letters or digits? Try six. Those are gone? Then seven, eight and nine. 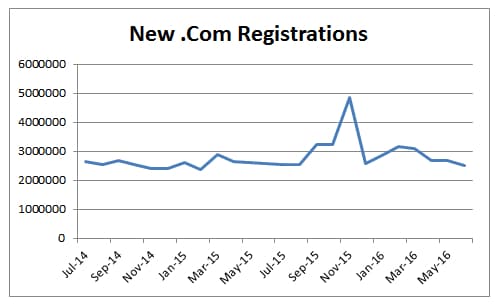 November 2015 was the high water month with 4.8 million registrations.

eName, a Chinese domain name registrar that generated about 15,000 .com registrations in October, suddenly pulled in 1.06 million. In a single month.

HiChina, another Chinese registrar, jumped from about 100,000 to 650,000. And HangZhou AiMing Network Co. registered nearly a half million domain names after registering just 10,000 the month before.

You’d think this would be good news. But for a monopoly like Verisign, shareholders cherish consistency and predictability. And the current quarter–one year after the blockbuster one–offers neither.

.Com’s steady growth could be heading for a cliff this quarter thanks to the better-than-expected quarter a year ago. Almost all of those 10.6 million domain names registered a year ago are coming up for renewal and it’s hard to predict how many of them will be renewed.

About 50% of new .com registrations are renewed on their first anniversary. But renewal rates tend to be lower in emerging markets. And in China, where domain investor frenzy created a bubble? It’s hard to know.

It might be a binary question. Either 90% or 10% will be renewed. Or it could be in the middle, with people keeping their “best” six character domains and dumping the rest.

Given how the Chinese market has fared this year, I think a lot of people will choose to not throw good money after bad.

Financially speaking, the Q4 2015 boom was good for Verisign any way you look at it. Even if a domain isn’t renewed, the company still got an extra eight bucks for renting it over the past year.

But investors that like predictability aren’t Verisign’s only problem. I imagine the same new top level domain name companies who keep beating the drum about .com hitting a peak have already crafted press releases to mark this occasion.

There’s a great chance that the total base of .com domain names will fall in Q4 compared to Q3 of this year. When that happens, some people will push the narrative that new TLDs have caused .com to peak.

In reality, it was China. It created a bubble in .com and that bubble is deflating.

But that might not be the story that makes headlines. And that would be bad for .com.