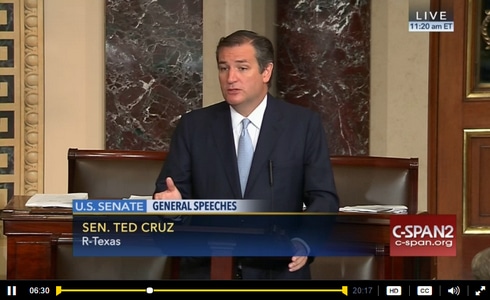 Senator Ted Cruz just gave a speech in the Senate proposing adding an appropriations rider to the upcoming continuing resolution in an effort to halt the IANA transition.

He repeated many of the same false claims he has already made regarding the transition.

Cruz claims ICANN is an international body akin to the United Nations. He claims that the transition empowers China, Russia and Iran to censor the internet.

“Imagine searching the internet…and seeing a disclaimer that the information you’re looking for is censored,” he said. “It [the content] is not consistent with the standards of this new international body. It does not meet their approval.”

Amusingly, he later points out that some internet giants have agreed to censorship requests by certain countries. Cruz suggests that the powers that be are determined to censor the internet. Yet this also shows what we already know: governments and other entities can already apply censorship to some degree inside their own borders. But no one country controls the internet.

Cruz also claims that the only assurance it can get from ICANN about the .gov and .mil domain names remaining in the United States’ control are that it will notify the U.S. government if it plans to give the domains to another entity. He gives an example of what could happen.

“So if someone is going to the IRS, or what you think is the IRS, and you’re comforted that it’s on a .gov website so that you know if must be safe, you may instead find yourself victims of a foreign scam,” he claimed.

Cruz apparently read the following sentence in a letter from ICANN’s CEO:

“ICANN confirms ICANN’s obligation to notify the National Telecommunications and Information Administration (NTIA) of any redelegation requests associated with the U.S. Government administered .mil, .gov, .edu, and .us TLDs.”

But not the very next sentence:

“Further, ICANN confirms that it or its contractor will not take any action to re-delegate these U.S. Government administered domains without first obtaining express written approval from NTIA.”

Cruz then compared the IANA transition to giving up the Panama Canal. He also asked, “Who in their right mind looks at the internet and says, ‘You know what we need, we need Russia to have more control of this'”?

ICANN to Ted Cruz: the internet is global, so shove it

PIR pushes back on ICANN after California AG gets involved